Heading north towards the Abacos!

Catching up for the past few days....


We ended up at Blackpoint Settlement for a couple of nights.  The first night was rolly and awful with winds from the unprotected west.

We went ashore back to Scorpio's since Tuesday is "cruiser happy hour" at the pub.  We met some of the nicest folks from Texas.  They're a young family living on their sailboat SAVA.  The boat name is a combination of their first names.

We walked back to the dinghy dock with them after dinner - Victoria petting a goat grazing at the side of the road. 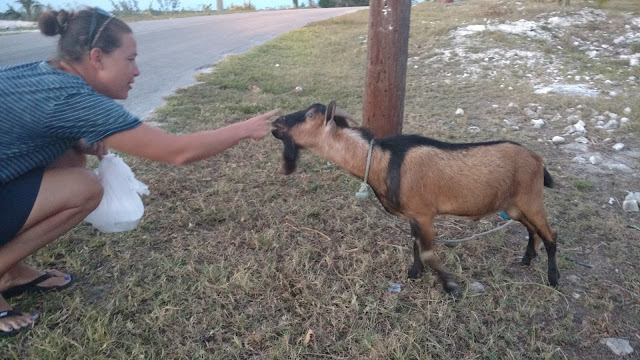 The next day, the whole family came over to Sojourn - they wanted to look around on the catamaran (they're on a monohull and are thinking of getting something bigger.) Sweet family, cruising to the Caribbean and home schooling the kids. 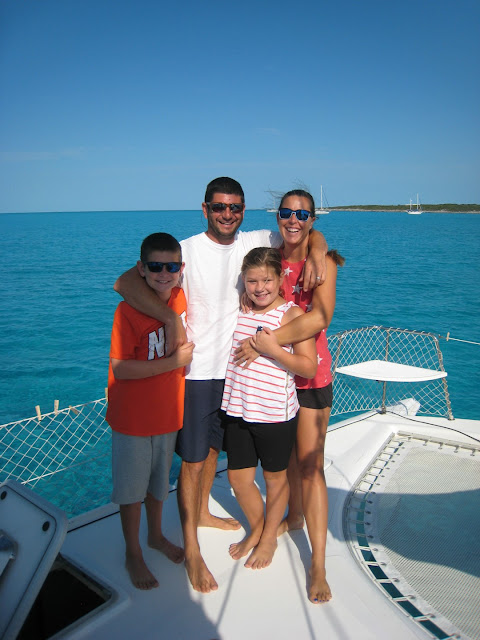 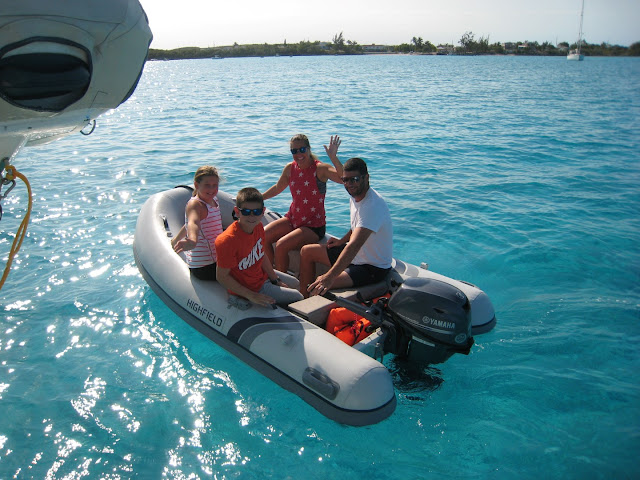 We left Blackpoint and headed north, originally thinking we'd only go a few hours north, but since we had a fabulous sail we decided to go all the way to Lobster Cay (near Highbourne) for our "jump off" spot to head to Eleuthera. We'd never been there - it's just a spot on the map that we could tuck in close to the shore for protection from the winds.  We thought it would be well protected, but it turned out to be pretty rolly also..... 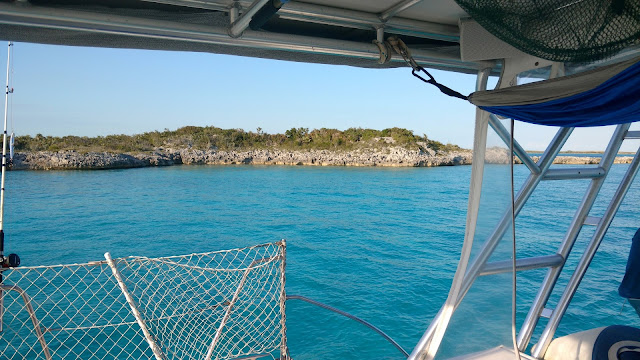 You can see that the water is not nice and calm like you would hope, even after sunset. 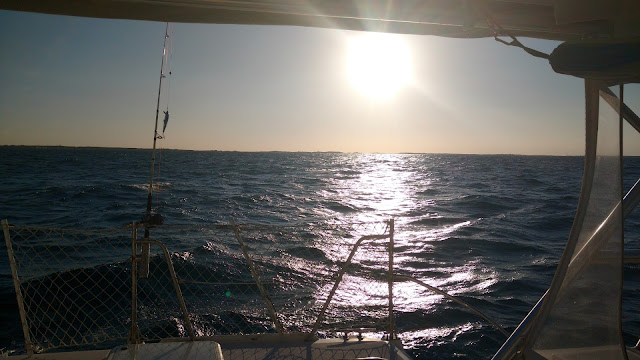 On the sail up, I made some more bread.  Getting pretty good at it! 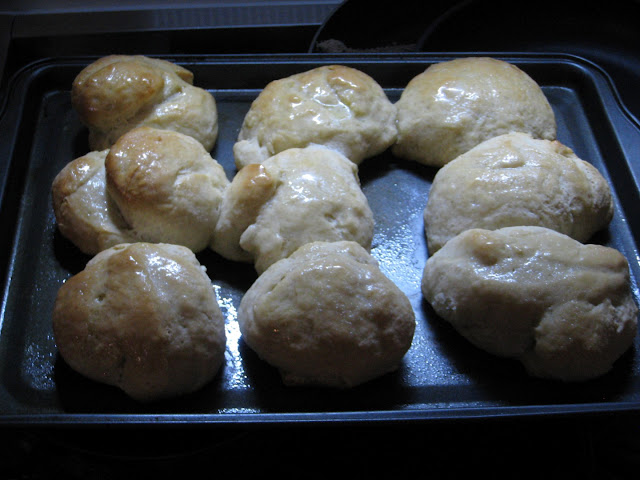 Dinner in the cockpit  - grilled burgers (beef for Duane, turkey for me)using the buns I made, black bean salsa and coleslaw.  We eat pretty good!! 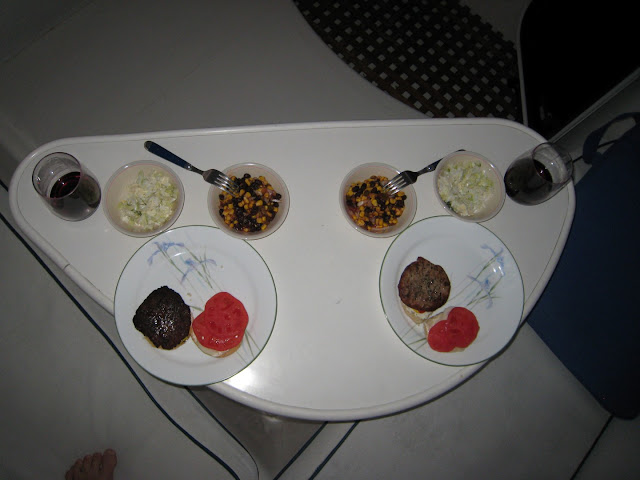 Up early and ready to head to Eleuthera! 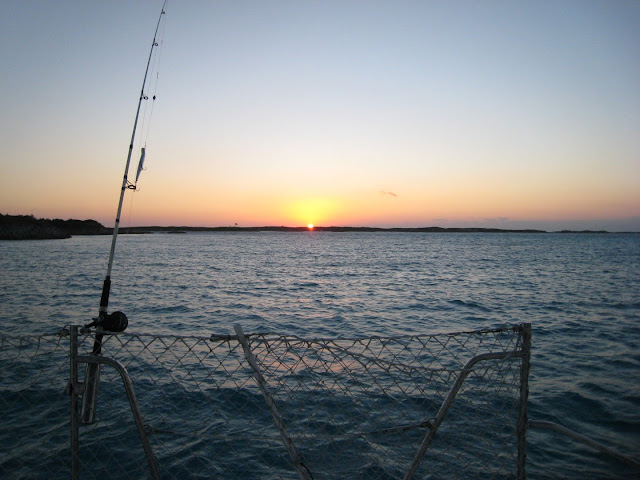 Beautiful water - passing Beacon Cay at the north end of the Exumas. 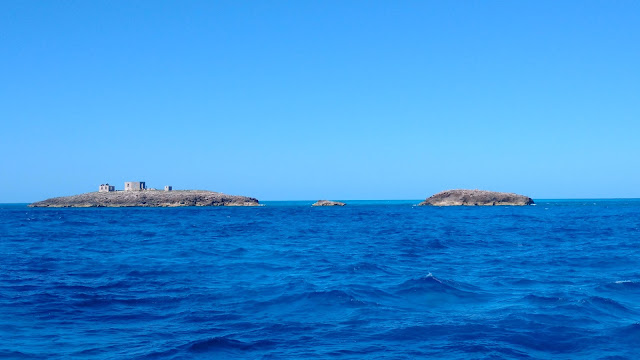 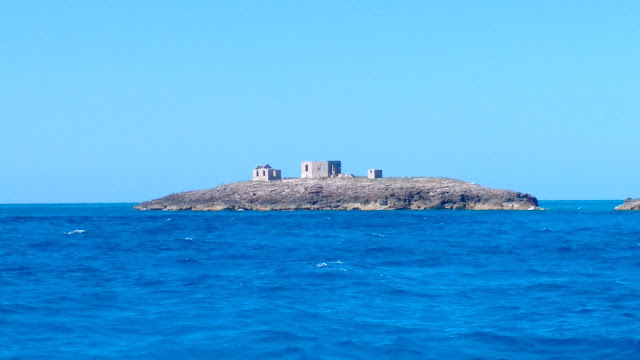 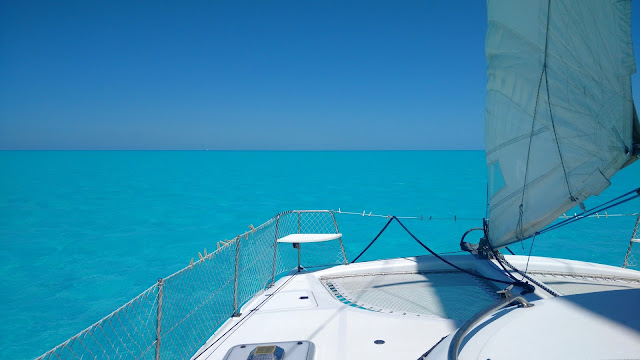 This is the chartplotter - showing all the coral heads - each little X is a coral head that we have to dodge. 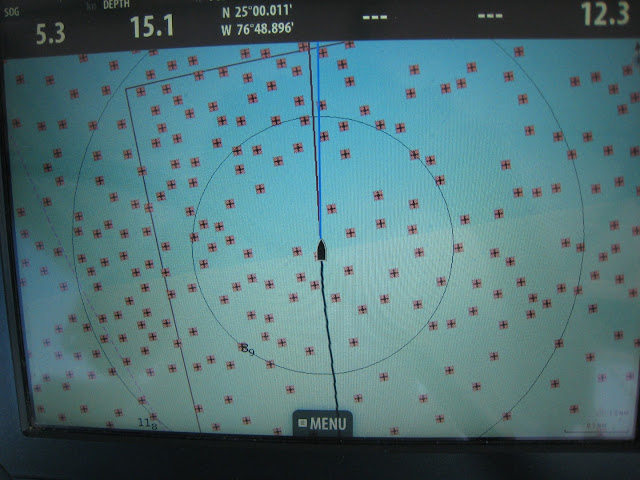 This is what the coral heads look like from the cockpit. It's not clear from the charts how deep they are - so we dodge each one! 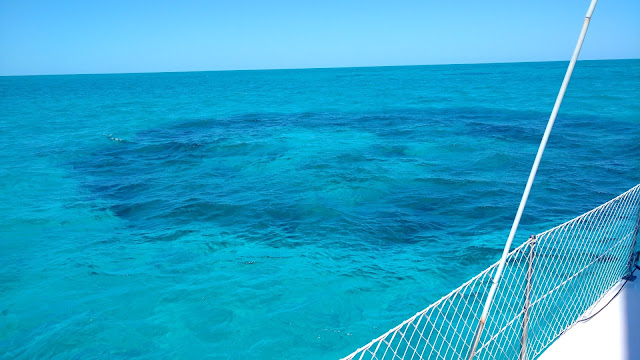 In order to get to Spanish Wells, our destination for the night, we had to go thru a narrow cut - called Current Cut. We'd read that currents were strong here, so we timed our arrival for "slack tide". Can you see the way thru? 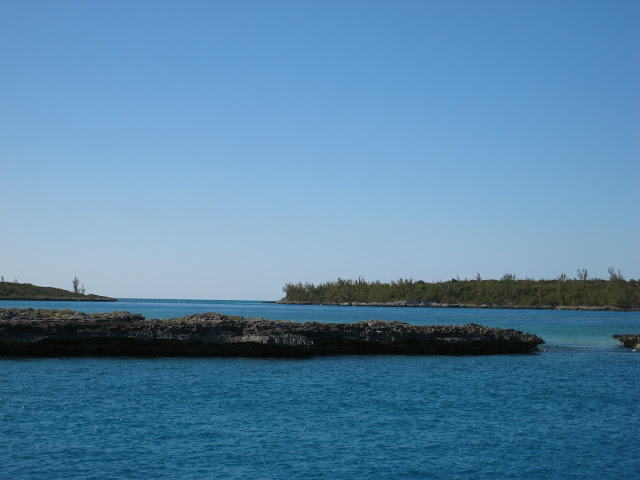 A little further in, it became clear - no sweat! 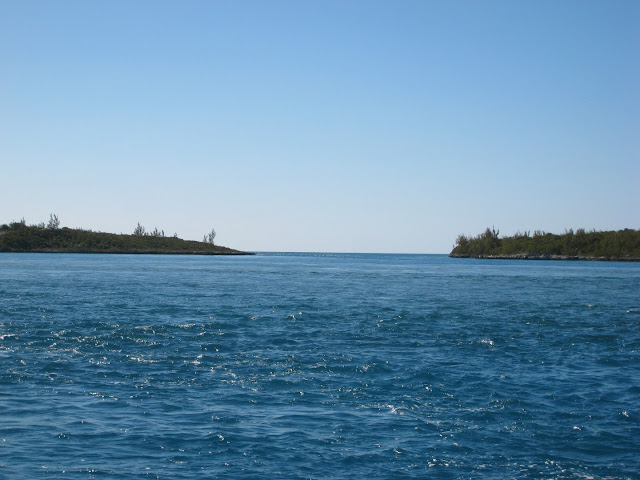 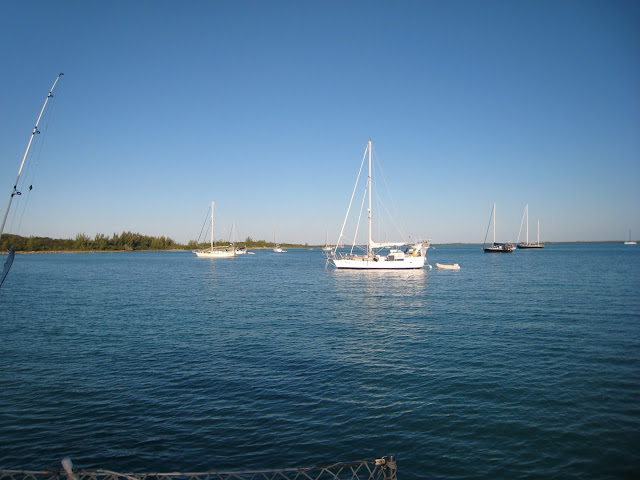 Went ashore to investigate - definitely more "upscale" that some of the islands we've been at lately. 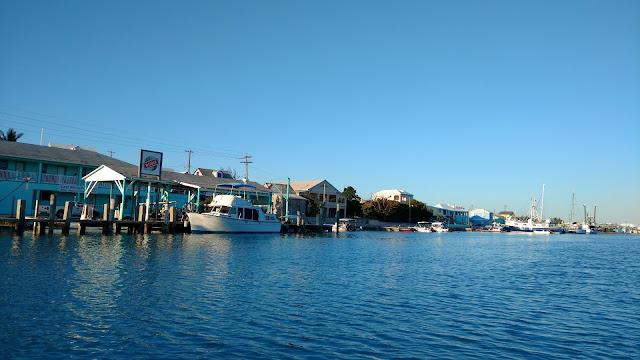 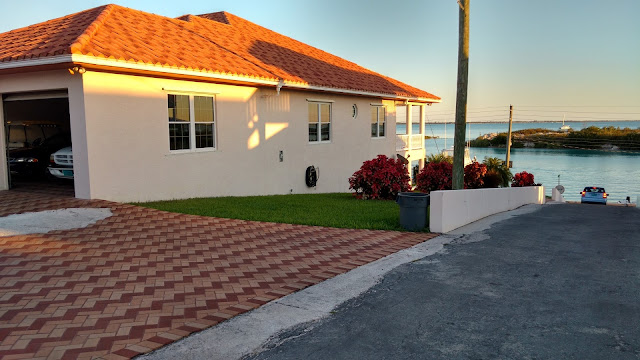 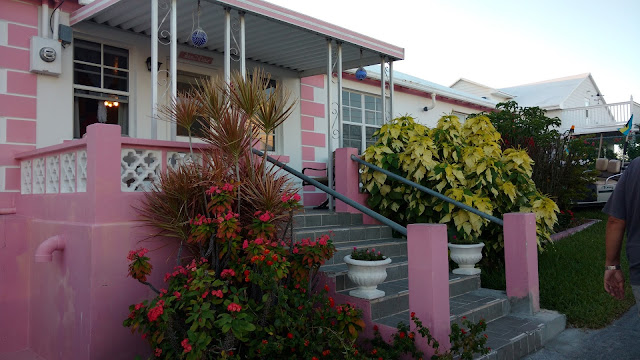 We'd read about Budda's Snack Shack - so we hunted it out. Interesting - I think it started out as a "food bus".... 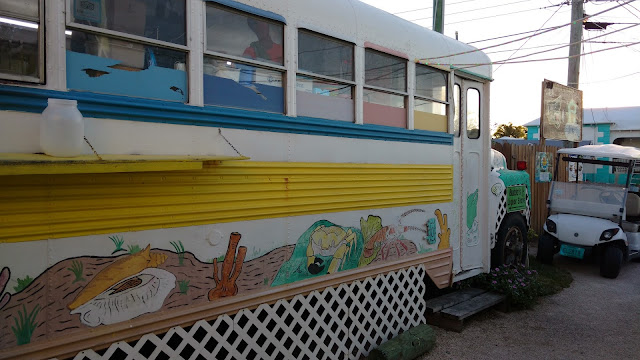 We shared a snack and a couple of beers. 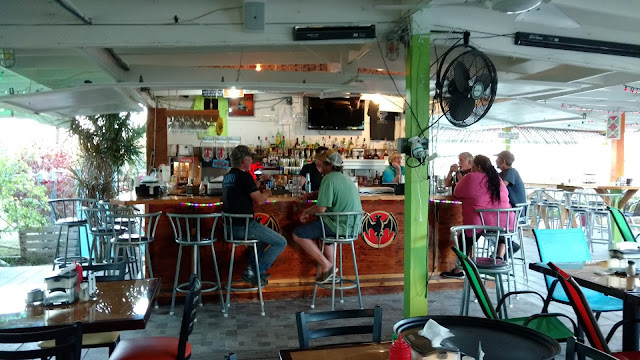 Back to the boat for a pleasant night.....traveling to the Abacos tomorrow! 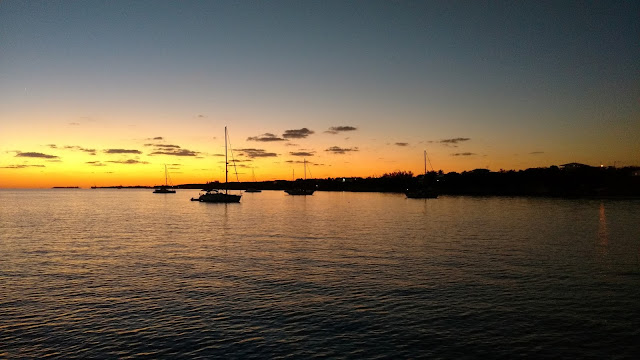