Today was the "Cruiser's Regatta" in harbor race.  We'd been invited by Now and Zen to be "crew" for the race. (Our insurance specifically prohibits racing, so we did not enter our boat in the race).

Here's a photo I grabbed from Facebook that was taken by a drone.  Now and Zen  is to the left of our nemesis boat Spiraserpula.  Although it appears we're in the lead, they actually are since their start time was a little later than ours. 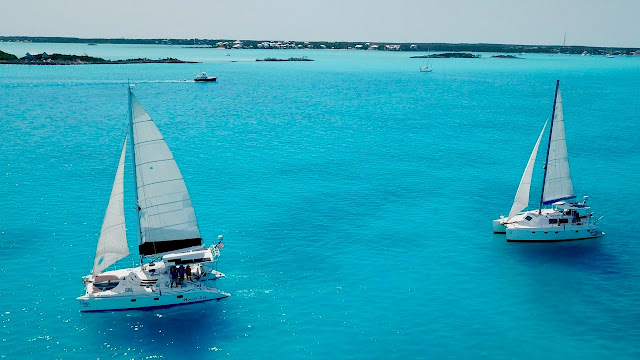 First thing in the morning, we rafted Now and Zen to What If for some preparations. 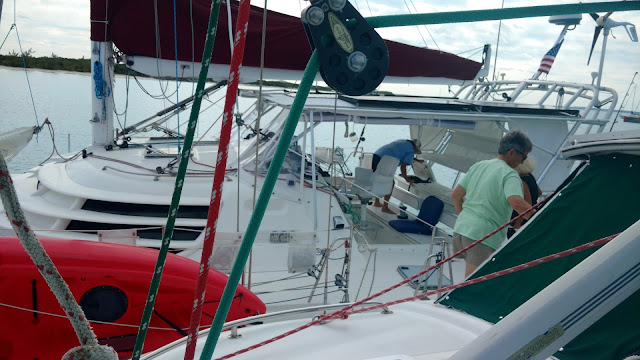 Ed and Duane got in the dinghy and applied our "race numbers" - we were boat number 12. 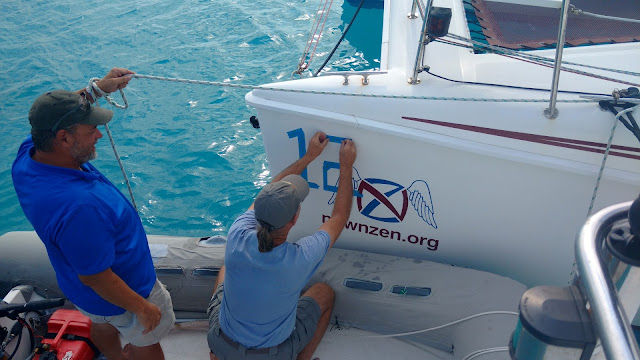 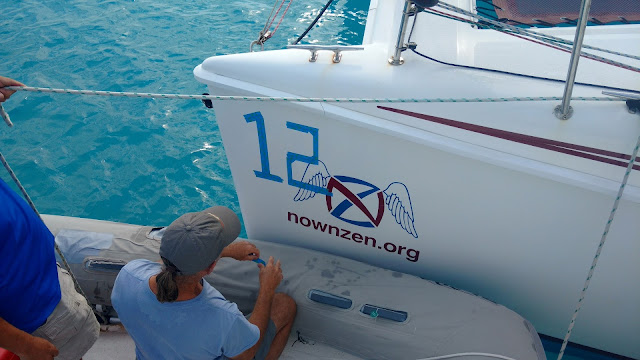 Race underway - it was about 9 miles in a oblong circuit around the harbor.  Captain Ralph calmly at the helm, Duane and Ed working the sails and Cathy was the official "sail trim caller". 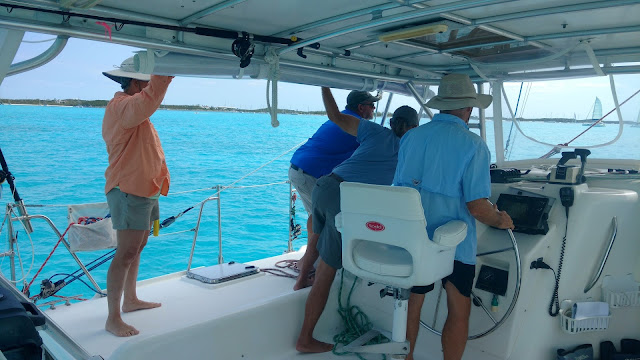 Spiraserpula was our only real competition and it was great.  There were only 3 boats in our class - the other boat was a trimaran and was very much faster than either of us. 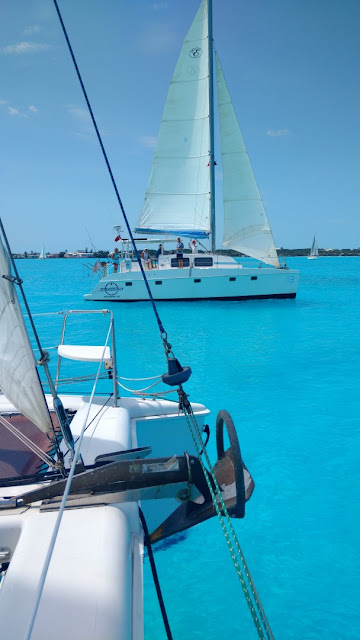 The race lasted about 3 hours. 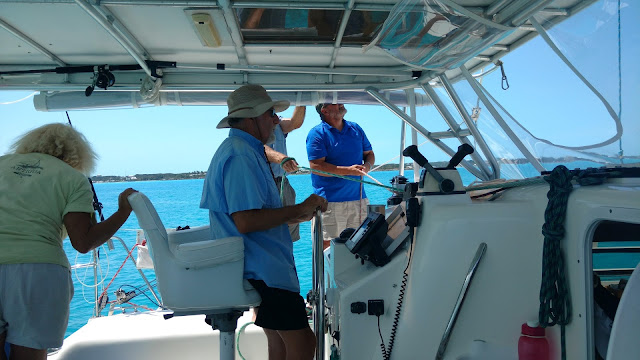 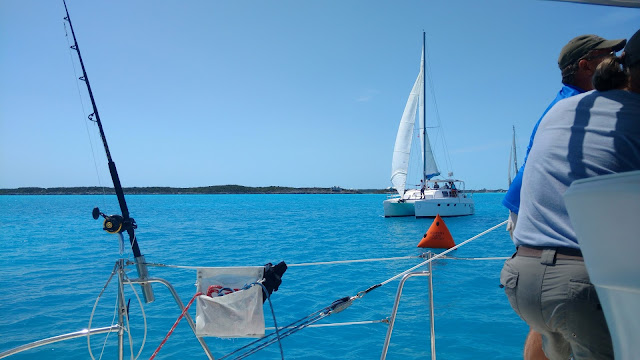 Spiraserpula rounding the marker.  Again, it looks like we're ahead, but they are in the lead by their time.  But not by much! 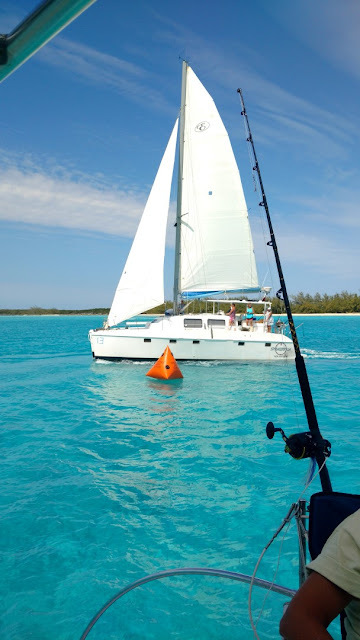 Boats in other classes - fun sailing in such close quarters! 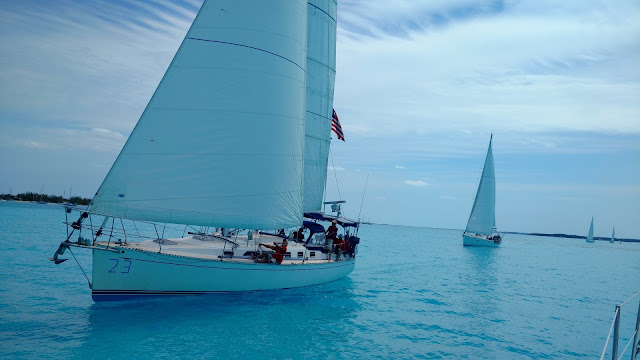 Spiraserpula crew at work on their sails. 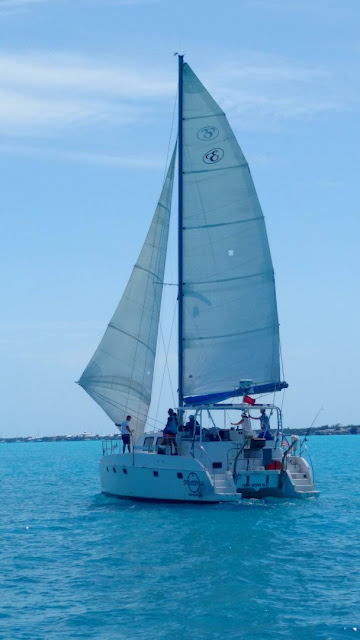 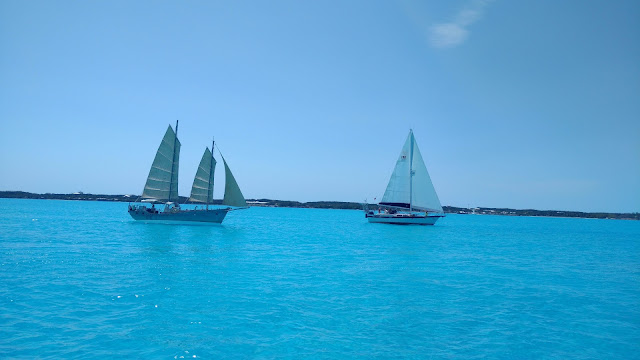 After just one wrong turn on the race course, we've gotten our horn-blast as we crossed the finish line.   A quick lunch and we were all back to our own boats.   "Awards" ceremony would be later in the day. 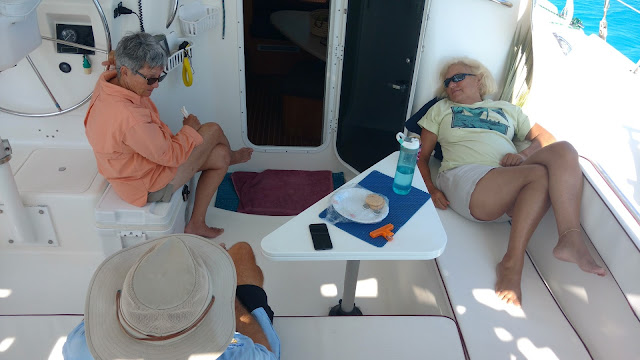 We had a few errands to run ashore, so we packed up the garbage and took it with us before the awards.   Thought I'd share how we dispose of garbage here.  Only one way to do it.  This truck stays parked by the dinghy dock.  You put your trash there - and slip a few dollars thru a cracked window. 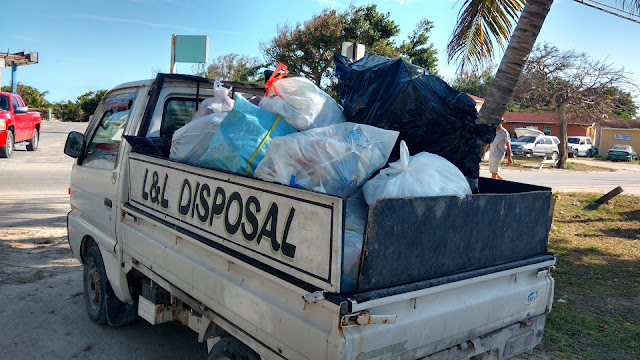 We all made it over to Peace and Plenty - here's Captain Ralph getting the 3rd place prize for our class.  Haha - there were only 3 entries!   Spiraserpula beat us by just under a minute!!!  A really fun race.  (The first place boat was so far ahead of us, we hardly saw them). 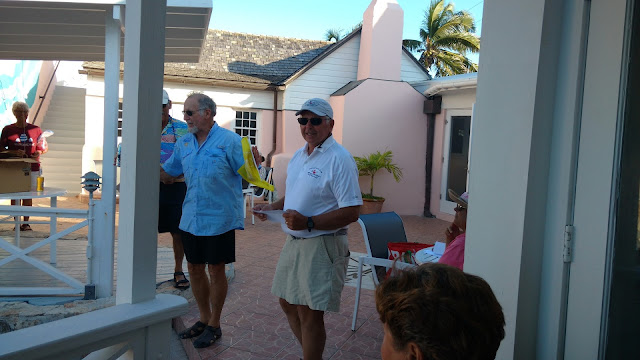 The prize - a nice flag for Now and Zen and a large can of  "Bush Crack Special Bahamian Beer".
We'll have to ask Ralph how the beer tastes!  (The winner got a bottle of rum and 2nd place got a bottle of wine). 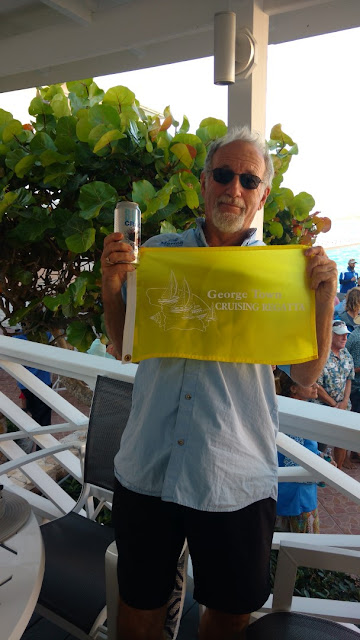 But a really fun day and thanks to Ralph and Leslie for inviting us to come along. 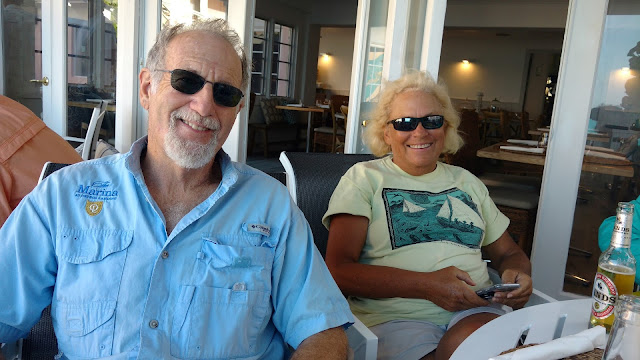 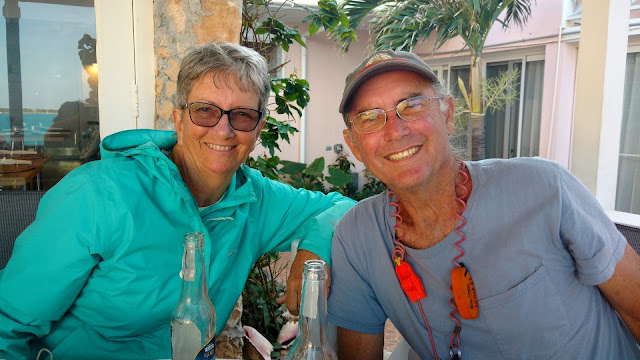 And us!  (looking a bit sunburned and wind-blown!) 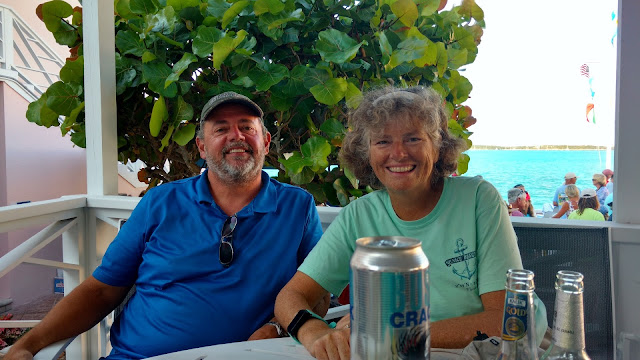 On the way back to the boat, we all stopped by the Bahamian family day music festival.  Really loud music at times!! 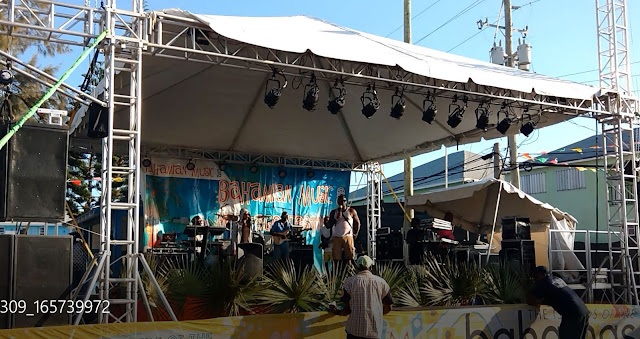 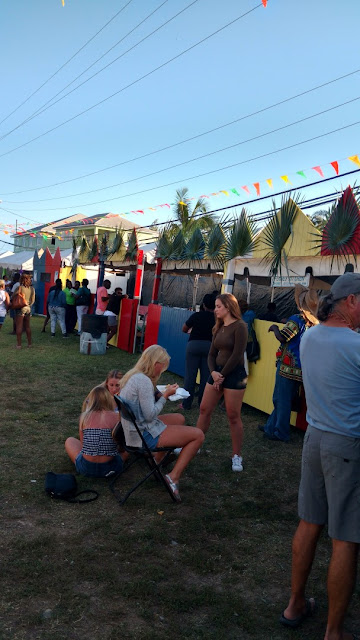 A little veggie stand - we couldn't resist the pretty tomatoes. 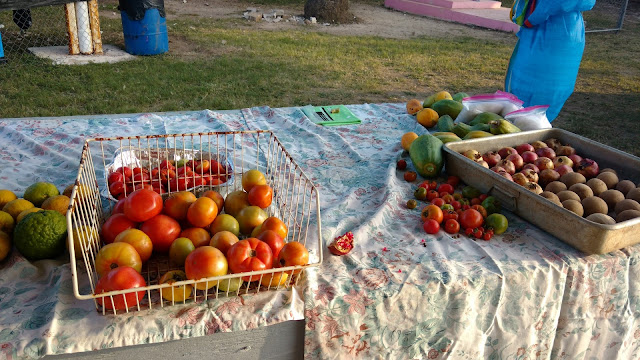 My score - tomatoes and a papaya. 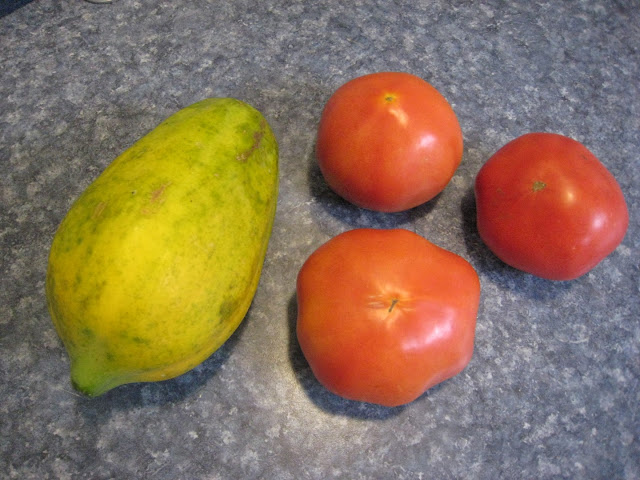 Saw several kids on these wooded scooters having a blast. 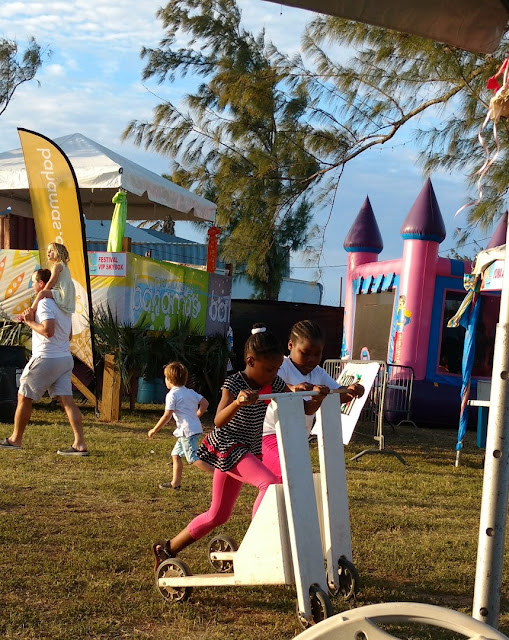 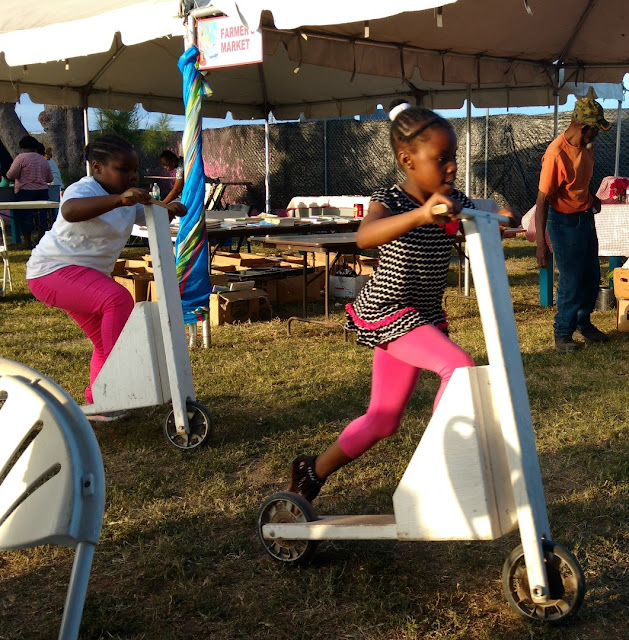 Back to the boat for a lovely sunset -  Roam silhouetted by the pretty colorful sky. 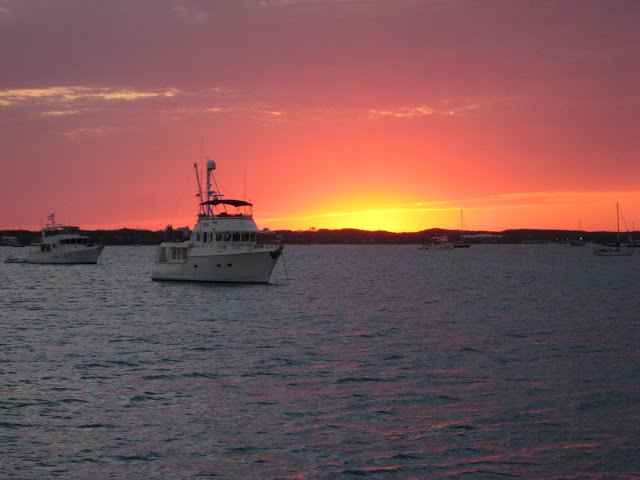