This weekend was the annual Oriental Boat Show, held at Pecan Grove Marina, home of Glory Days. We had promised to fly over the marina and take some photos for the sponsor (The Oriental Rotary Club). But, the plane was in for it's annual maintenance for the past few weeks....and we just got to fly it away at about 4pm on Friday. This is a problem because the show ends every day at 5pm and Saturday was not an option because of the horrible weather forecast! So, we decided to fly over and make the best of it - it was about 6pm by the time we flew over. The sun wasn't at a great angle, but it's better than nothing! 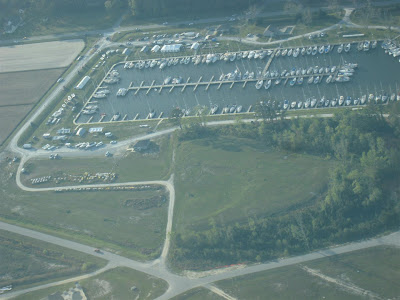 Always nice to see the pretty town of Oriental! We actually don't fly out here too much - we usually land 25 miles short of here in New Bern where we park our car. 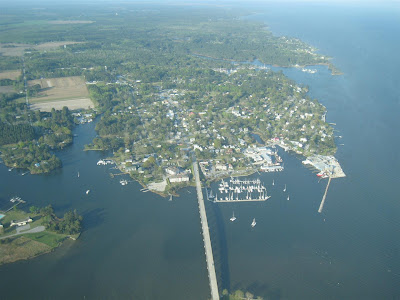 When we did make it to the boat show (Saturday morning) they had these cute "special badges" for us. I had been doing all the communicating with the organizer...so I was deemed the "Official Boat Show Photographer".....Duane is a mere assistant (even though he was flying the plane!) 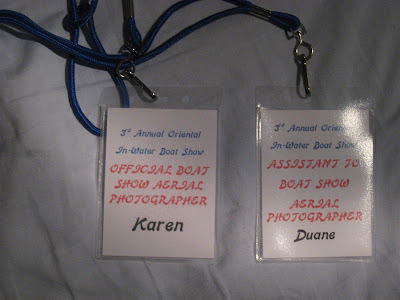 The horrible weather was already headed our way Saturday morning. The boat show tents were already starting to strain in the wind. 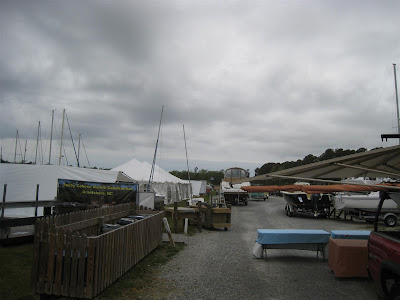 We decided to scoot back the 1/2 hour drive to New Bern airport and move our plane from the tiedown on the ramp into a tee-hangar. (At that point, they were forecasting 50+ knots of wind and hail, so we were afraid the airplane might be damaged worse if we left it on the ramp). 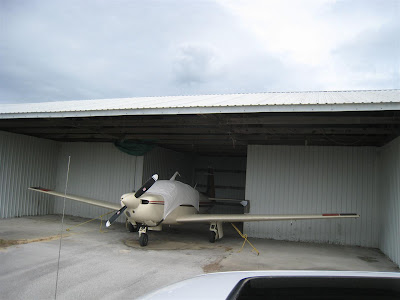 At the marina, about mid-day, they started taking all the flags off the boats and started disassembling all the tents (the ones that were still standing, that is!) 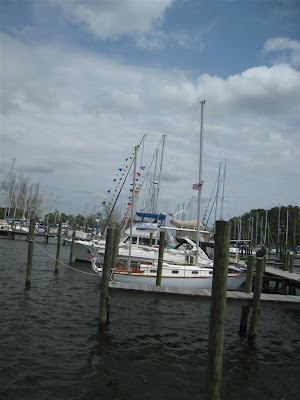 It doesn't show up too well here, but the sky was just "mean" looking and the wind was just a big roar. 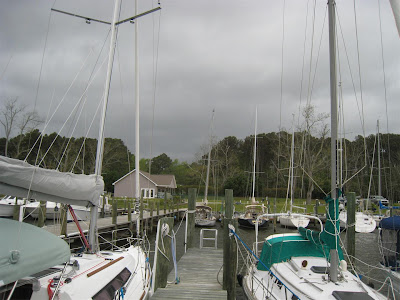 At about 8pm, we decided to vacate the boat. It was straining hard against it's very strong docklines, heeling over in the slip due to the extremely strong wind hitting it broadside.

We just ran (in the rain) for the nice, new, cement and stucco club house. We still had power and internet - so we sat for about an hour and listened as the wind-driven rain pelted the windows and watched the radar on the internet. Soon it was over and nothing was harmed (at the marina, at least). Of course, we now know that there was much damage around the eastern half of the state and much loss of life. Sad. 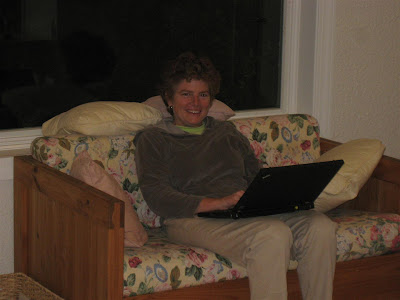 Sunday dawned bright and beautiful!! We needed to go sailing!! 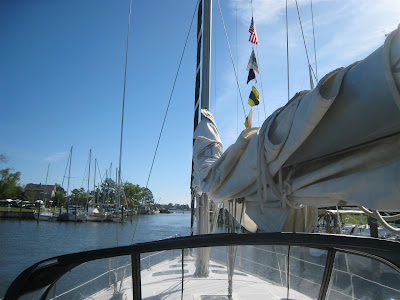 Off we went to our new favorite day-trip - River Dunes for lunch. Had a great sail - turned the engine off as soon as we left the channel in Oriental - didn't turn it on again until we were approaching the channel at River Dunes.

I always have to post about passing ferries.....we were sailing along, no other boats in sight.....I looked back behind the boat and spied a large vessel approaching. As it got closer, I realized it was a ferry. The strange thing is that no scheduled ferries run the area we were sailing. As it got closer, we could see that it's the one named "Roanoke". I don't recall riding that one. There was only one car on it - possibly they were just moving it between locations for the coming vacation season. So, even on this short trip, I got to see a ferry! 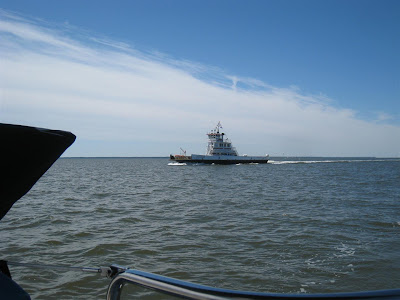 On the dock at River Dunes. Had a wonderful salad - the restaurant there has never failed to please us! 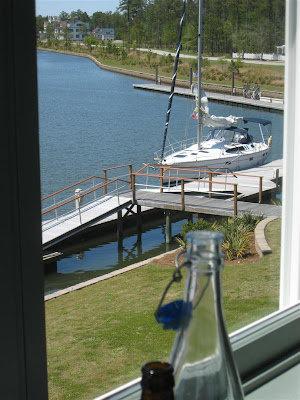 Back on the boat for a equally great sail back - two tacks - no motor! Read my "book club book" for this month - aptly titled "The Book Club". (Not a great one, by the way, but you can't read winners every time!) 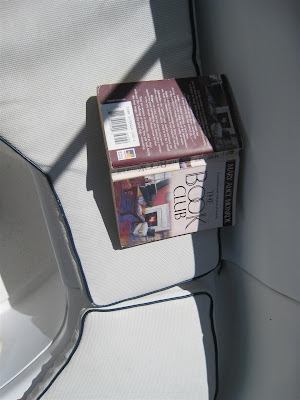 Such a nice day! Duane is enjoying himself too, I think! 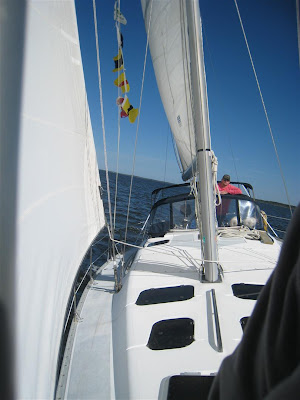 Just another of my little sailing videos.....

Almost home, dropping the sails.....like the birdies are waiting on us!!! 'Til next time!! 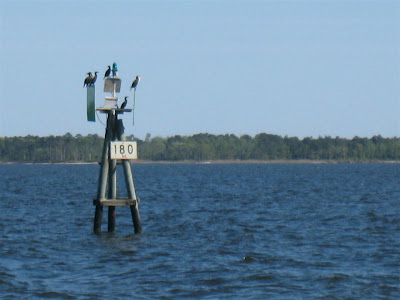 Karen
Let's see - I'm supposed to describe myself....married for WOW 40 years!, mom of two boys (now men), pilot, sailor (in training), happy (most of the time), traveler (when I can!), always have a book on the nitestand, always planning the next adventure (big and small!)