We had a WONDERFUL trip over to Ocracoke this weekend!!

Amazing we can return time after time and still enjoy.

Wednesday afternoon, we flew down to New Bern in two different planes - we packed ours full of "stuff" and Dick and Lindy did the same. Luckily, it all fit (barely) into our Escape that sits at the New Bern Airport.

We were all settled and ready to leave Thursday morning early - beautiful weather - unfortunately, no wind to speak of leaving the marina. 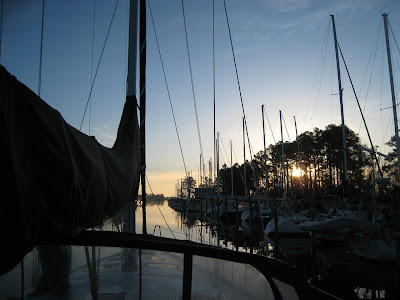 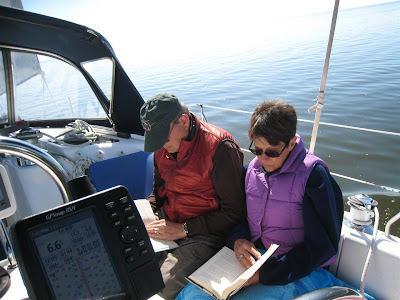 Our longtime flying friend, Bobby Cox, had told us he was going to fly over to Ocracoke for lunch - so I told him to look for us out on the Pamlico as he flew over. True to his word, he found us!!! I know this photo doesn't look like he was close - but he swooped down very close to the water as he went by. 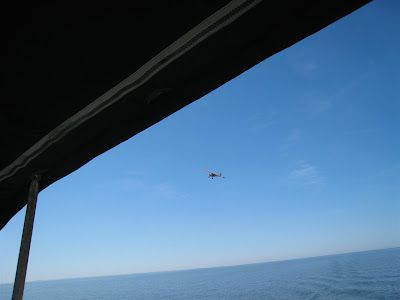 And off he went to the Ocracoke Airport. 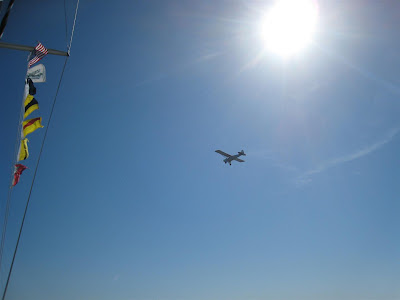 Everything is so much the same, trip after trip....at some point along the route - we see a ferry - either the Swan Quarter or Cedar Island, depending on our timing. 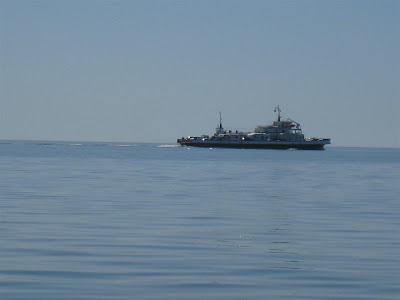 Always nice to have to water tower in view - you know you're close then! 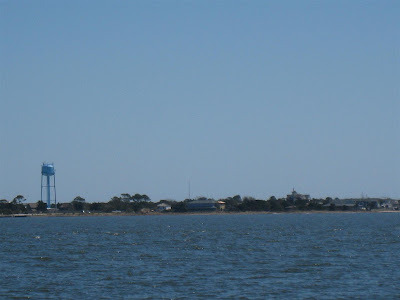 Got the boat all tied up and tidied - it was off to rent bikes. There was a group of buses leaving the ferry dock - and we noticed their advertisements - from Swannanoa! Mom will think that's cute (her hometown back near Asheville). Just a little odd to see them so far from home in such a hard-to-get-to place. 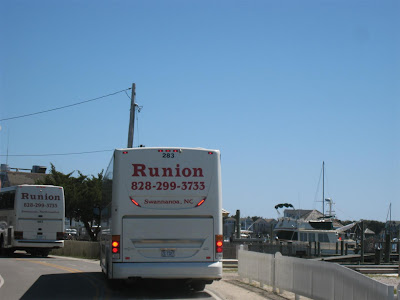 After we got the bikes, we made it up to Howard's Pub. We didn't expect to see Bobby Cox because it was several hours since his "fly-by". But, sure enough, as we were walking in, he and his grand (or great-grand) son were walking out! The grandson saw our bikes and wanted to go for a spin - so - Bobby and he borrowed two of them and toured for a while when we were eating our lunch. Not bad for 80 yrs old!! Many more to ya, Bobby! 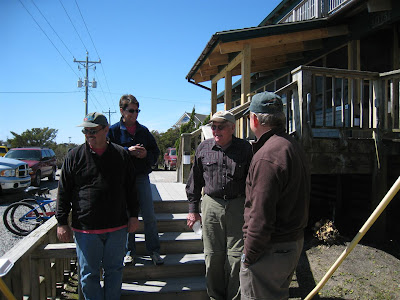 After Howard's - we needed to work off some calories. It was off to the beach - we rode our bikes for a couple of miles. Good workout on the sand, for sure!!! 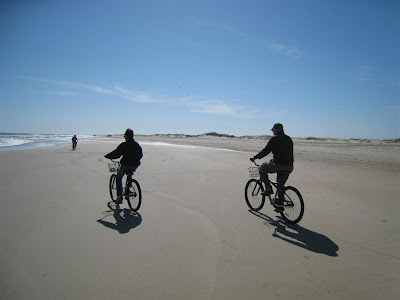 Back at the boat - Dick and Lindy preparing to go for another bike ride. 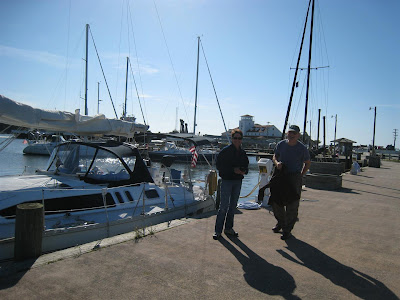 Pat and Diane arrived late Thursday and came over to the boat for a little snack. The were back Friday morning for a cup of coffee/chat. 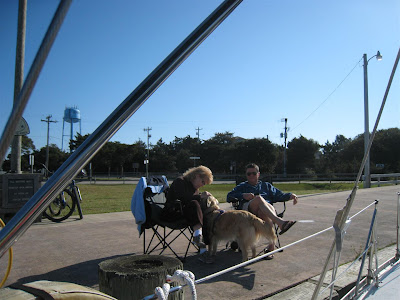 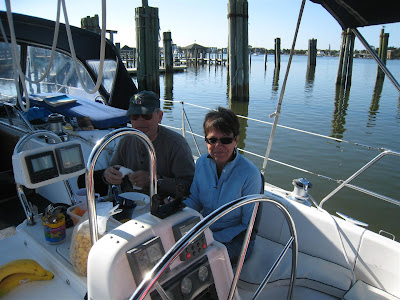 Our "Quartet of Couples" was complete when Sharon and Buddy arrived on the ferry Friday morning. 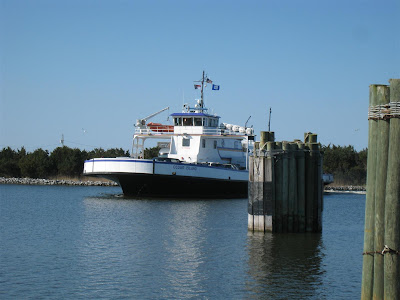 More reading. We are one relaxed bunch! A group of Girl Scouts from the island came peddling cookies. We are such suckers. Yum. Thin Mints! 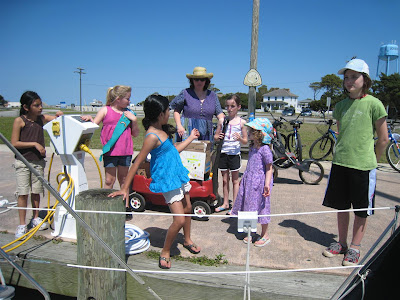 Off to Dajio's (formerly the Pelican) for the 20 cent shrimp and a few games. Ring toss and darts. Lindy and I had a close game. 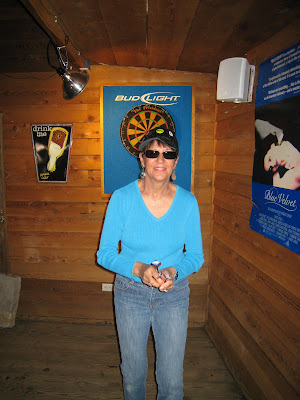 Sharon and Duane had a sibling match! 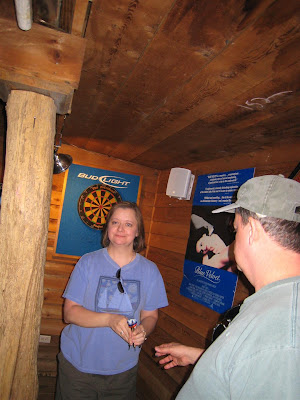 Walking on the beach - chilly but who could complain? 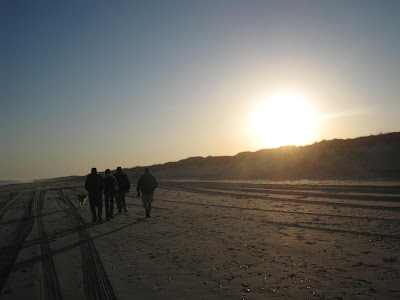 Pat and Diane camped about 5 miles from the dock - at the NPS campground right on the beach. They ran into some fishermen with extra Red Drum - who gave them a huge fish....so, we were all invited to the campground for fresh fish. 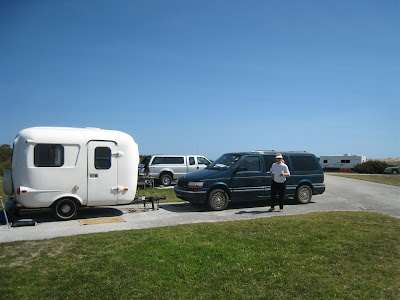 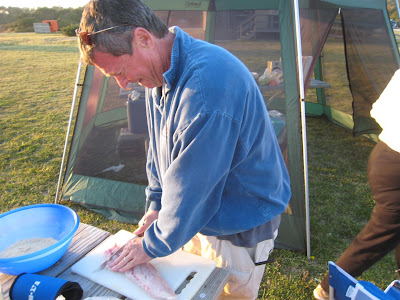 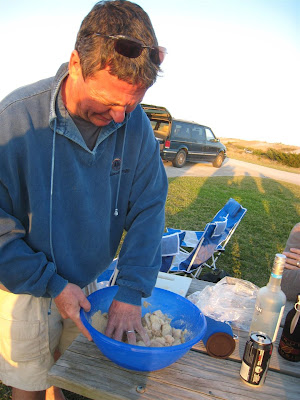 Fried it up on the campstove. They served it with fresh coleslaw that Pat shredded with a knife! (remember, this was not a planned dinner so they didn't come prepared to shred cabbage). It was FABULOUS - nothing like fresh caught fish! 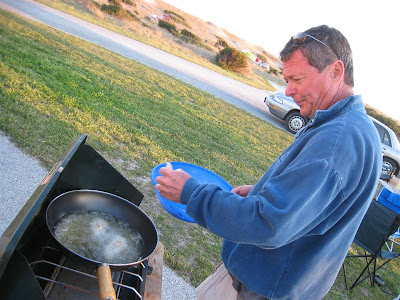 Afterwards, the mosquitoes were a bit hugry - so all 8 of us piled into the "burrow" (as they refer to their camper). Remember, this camper only sleeps two people! 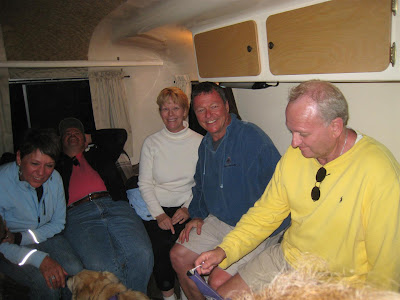 Many silly jokes were told - we were in tears from laughter at times.

I just wonder what some of the other campsites thought we were doing in there! When it came time to leave, I bet it looked silly as all 8 of us came out the door in succession - kindof like "let's see how many people we can fit in a VW Beetle. 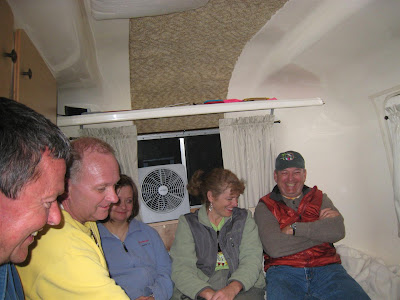 Some duckies hang out around the marina. Pretty, but I'm not fond of what they leave on the concrete dock!! 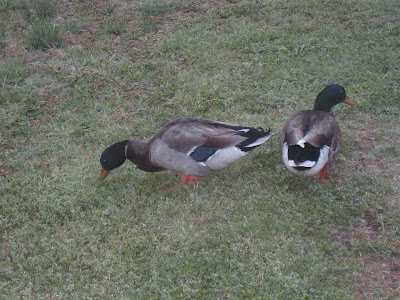 The next morning was surprisingly foggy - hadn't expected that. Kinda cool, though. It burned off very quickly though. 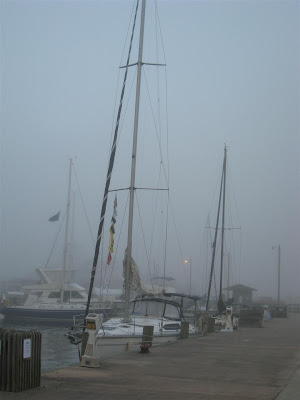 Sharon and Buddy ready for another outing. 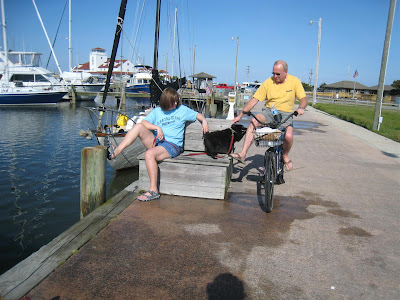 This time, we decided we could manage the 5 mile bike ride up to Pat and Diane's campground. UGH....it was straight into the wind. We made it though. Went on a neat little nature trail out to the sound side. 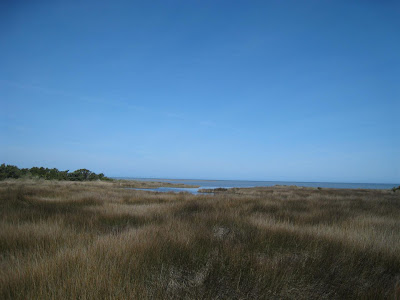 A neat little lookout over the marshy wetlands. 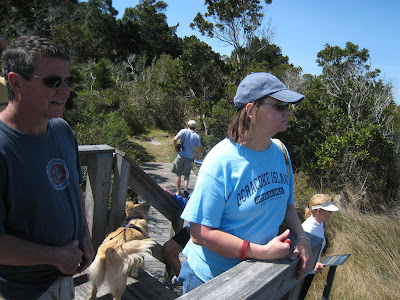 The "gangs all here" - another great mini-vacation! The sail back to Oriental and the flights back home were uneventful. Now the countdown to St. Martin really seems to be ticking fast!! 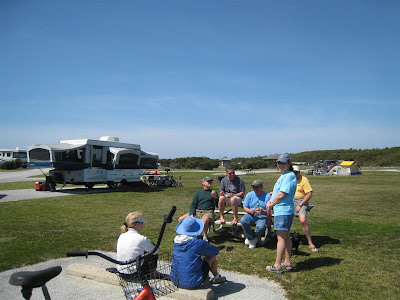 Oh - forgot this one - turn up the speakers - went to the little Creekside Restaurant to sip a beer and hear the steel drums. Neat!


Posted by Karen at 7:20 PM No comments: Links to this post