You'll note that I've put a Google map on the side bar.  It shows our GPS position points along the route.   I'm still trying to work out why the other tracking link isn't working.

For today's post, I'm going to paste my daily "trip log" and insert some photos of the 4 days we spent traveling from Galveston, Tx to Mobile, Alabama.   Some of it will be boring, haha.   Some of it pretty cool though!

Destination unknown, possibly a port on Louisiana, Mississippi or Alabama coast.  If we're really lucky with weather, all the way to Tampa area! 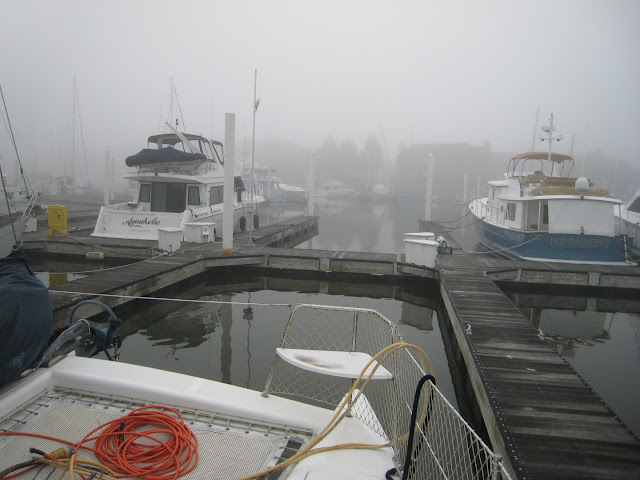 Waved goodbye to new friends on another Manta 40 - James and Crystal on Tex Pie. 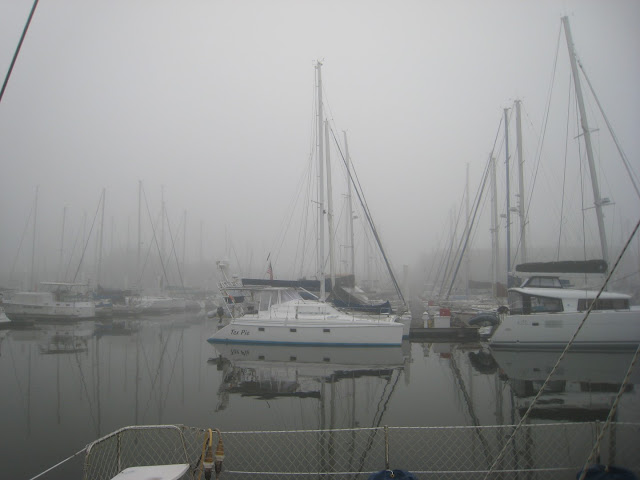 Motored for a couple of hours in the fog with me on lookout at the bow of the boat until the fog lifted a bit. Had apple slices with peanut butter for snack. 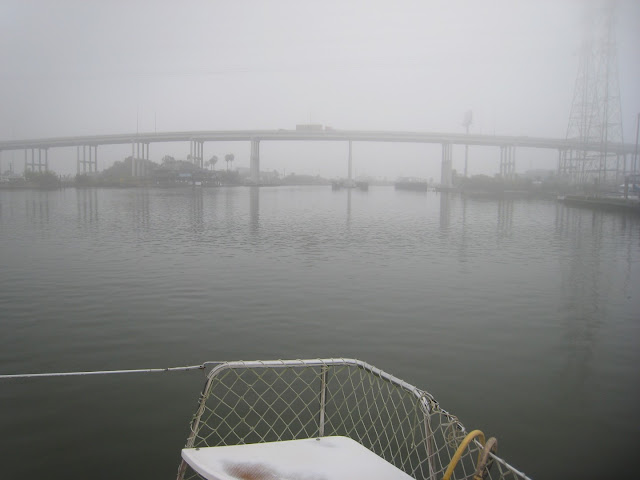 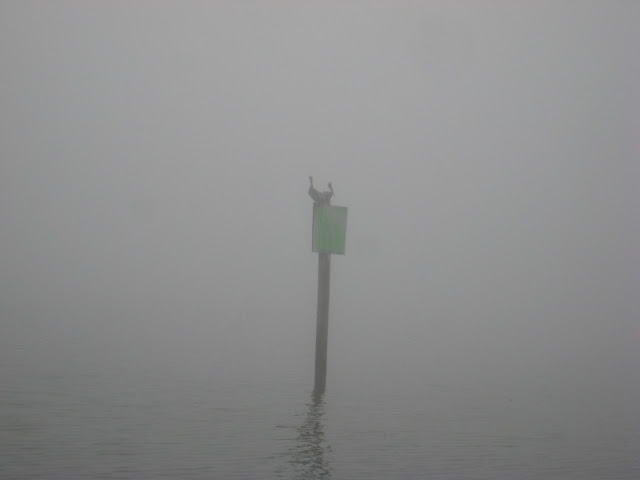 Once we were out the Houston ship channel, the fog lifted completely. 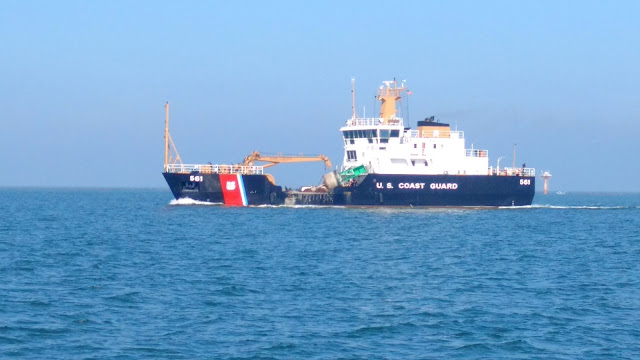 Lots and lots of traffic in the channel. 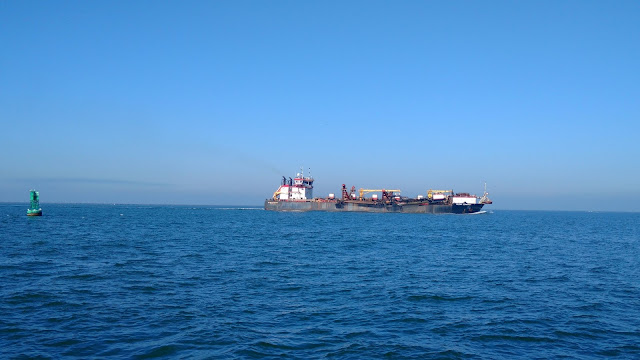 Once out of traffic, we raised the main and motor sailed mostly eastbound. 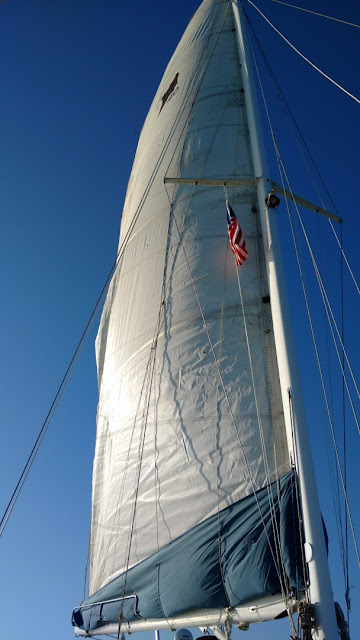 Seas were lumpy, making it hard to walk around the boat without a hard handhold each step.

Ate a peanut butter sandwich that I had made ahead.  That was all for the day since I was not feeling very hungry.  Doing well though based on past experience with seasickness!

I took 6-9pm watch.  Duane slept on the salon sofa. I tried to sleep in our berth, but since it's directly over the engine compartment, I decided it was just too noisy.  I slept well on the salon sofa until Duane woke me at 1215am for my watch.  Still motors sailing around 6-7 knots.  Dodged many oil rigs, no problem with our chart plotter and radar.

Really hard to get a good photo of the oil rigs at night with my cameras....we stayed well clear. 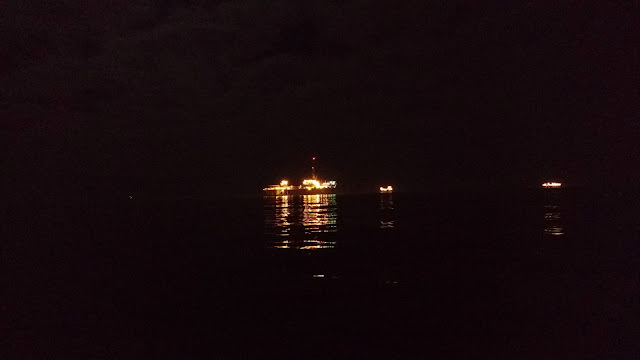 I felt pretty rested and woke Duane at 2am for a shift.  Instantly asleep on the sofa...woke at about 6am. Had an apple.  Pretty sunrise. 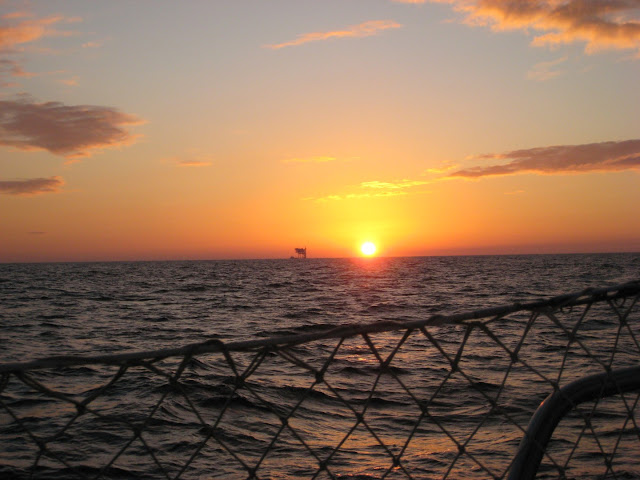 Duane woke at 9 and we had oatmeal for breakfast.  Raised all sails and turned engines off. Wonderful quiet!!  Winds 20-25 knots, seas still lumpy.   More oil rigs!

I'm kindof sore all over just from bracing all the time to the sway of the boat. 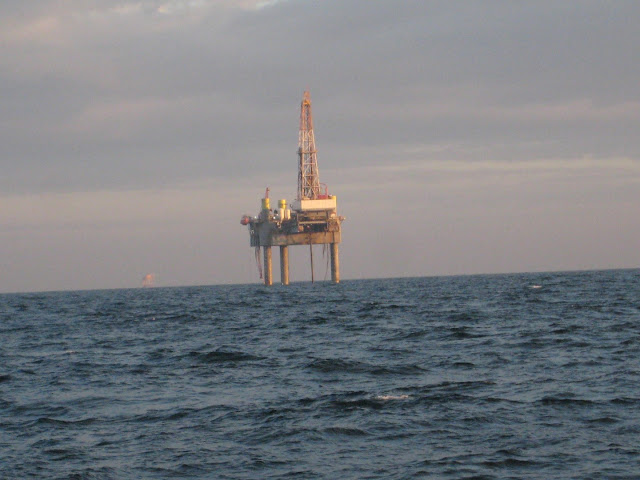 Had ramen noodles and a can of peas soup for lunch

We took turns on watch and snoozing/reading during the day. Amazing number of naps!

Since sailing has been so good we're not going to stop at the tip of Louisiana but head a little south to avoid a huge oil rig field that's south of New Orleans.

Watch this little video clip - the oil rigs have "bells" that warn you not to hit them!

I had some peanut m&ms for snack. Duane had a little pack of nabs.

Shook out the reef at 3pm when winds had died to around 20.  Still making 6-7 knots 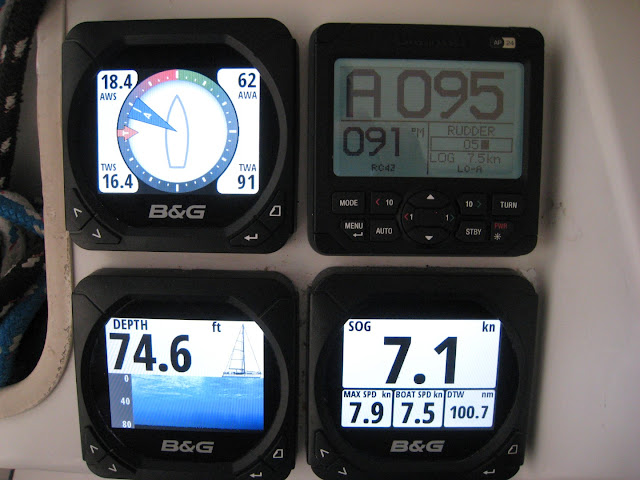 Wind much less in the evening.   Duane did 6-9pm shift.  I snoozed again and puttered. Sliced some apples for us both. I guess nobody wanted dinner tonight.

I did 9pm to 12am shift. Wind 8-9 knots making 3.2 knots under full sails. Dodging rigs again.
When t woke Duane at 1am, the winds had increased to 20+ knots and there were a few rain showers.  I went to sleep in our berth. So nice and comfortable not to have to brace yourself,and quiet because no engine.

I woke at 445 for a shift.  Duane had 2 reefs in the mainsail due and the starboard engine was running to charge the batteries (we had almost no sun so far so the solar panels have not produced much.  We motor sailed in lumpy seas around 4-5 knots, decreasing over a couple of hours as the win died down to around 8-10 knots, almost on the nose so little help.

About 830 we had tomato sandwiches for breakfast.

I laid down to rest and slept another 2 hours!  This is tiring work!

When I got up the engines were off and we were under full sail again.  Light winds and making only 3 knots.

Saw a helicopter land on a oil rig - hard to see, but it's the little dot at the red arrow.  Pretty cool. 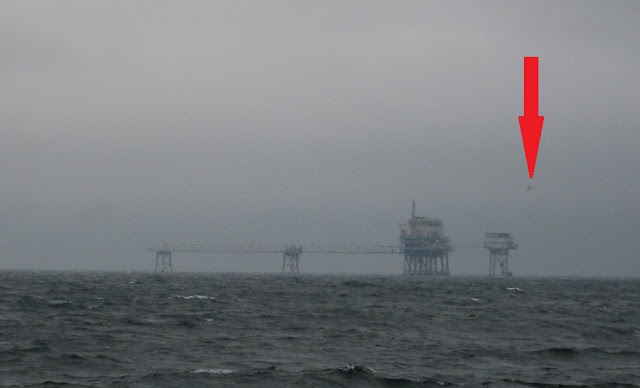 Looked at the extended weather forecast- looks like we only have two days of settled weather left.  Seas forecast 8 feet and a 5 second period...pretty nasty for a pleasure cruise!!!  So we decided to turn in and go towards Mobile, Alabama.  We'll need fuel, so we'll decide what to do next tomorrow when we get to Mobile.


Dropped all sails, running both engines at 2200 rpm to conserve fuel.  We're about 30 hrs out from Mobile when we turned.

When we were putting on the sail covers, we got to enjoy a pod of 20-30 dolphins playing at our bow!  The hung around for several minutes, obviously playing, swimming in circles around each other. Would have been spectacular if it had been earlier in the day with the sun higher. Still very cool.


Lunch was just some Tostitos with black bean/corn salsa. Since the ride is fairly smooth, I made spaghetti.  Nice to have a regular meal!

Winds picked up to 20 knots in the evening, but straight on the nose.

Pretty sunset but no "green flash"... 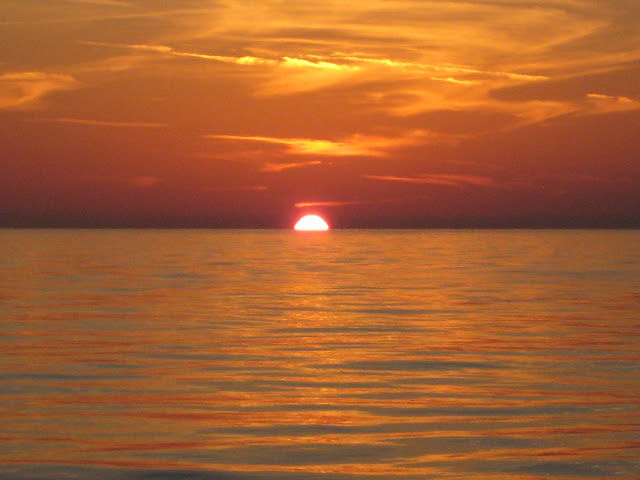 Dodged oil rigs again overnight and a bit of ship traffic.  Uneventful night watches with one engine running.  Between 3.5 and 4.5 knots.

Breakfast of oatmeal and peanut butter.  I took a long nap in our berth (the quiet one since no engine running on that side) from 8-10am.  Met a tug towing a huge barge- the captain called us on the VHF radio to verify that we would be staying on the same course.  They are very nice when they call(they know what our boat name is using the AIS system) and wished us a safe sail. 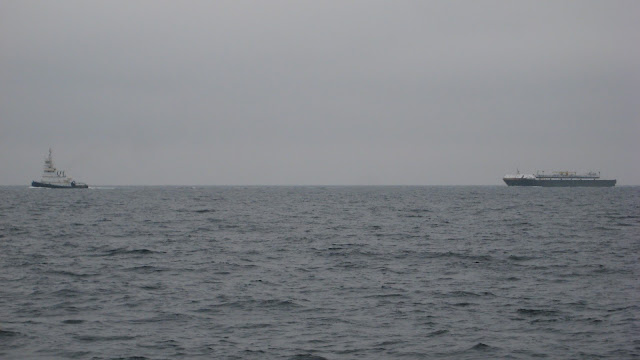 Pretty calm seas as we approach Mobile Bay. The oil rigs have thinned out so its not hard to maneuver around them.


Uneventful entry down the main ship channel into Mobile Bay.   We just turned right after the entrance and motored over to "Navy Cove" and set the anchor at about 8PM.  Time to rest and decide where to go over the next few days, probably down the Intercoastal Waterway towards Pensacola.