No one injured....just a royal pain and lesson learned. 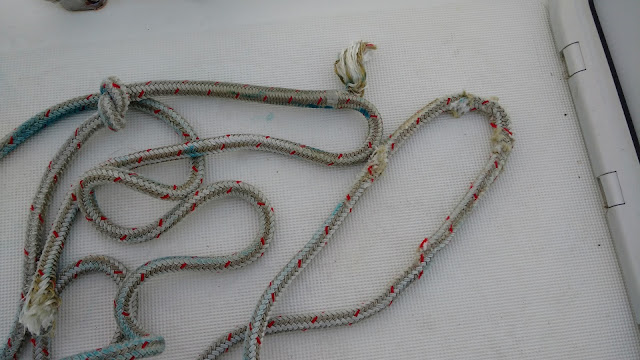 I ran over the dinghy line (called a painter) with the port propeller.  Dang....we had been to shore earlier in the dinghy and had just tied it close to the boat.  Later I heard it bump up against the hull - so I went out and let out a lot of slack in the line so that it wouldn't be as close to the boat.

Normally on this boat, any time we're running the engine, the dinghy is safely lifted up on the davits on the back of the boat so we don't even think about it.

How this happened - our mooring ball had gotten all tangled up in some confused seas/high winds while we were gone to NC.  So Duane went to the bow with the boat hook and I cranked both engines to power forward and allow him to lift the tangled mess and sort it out.

It took several tries since the winds were pretty brisk and the boat would get pulled oddly.  Somehow in all that, the dinghy line got under the boat and got wrapped very tightly around the prop shaft.  It's a 5/8" line, so a very strong line!

This is my fault entirely - since I should have never cranked the engine without securing the dinghy very tightly to the boat with no line exposed.  This is something we did without thinking about it on Glory Days since it was the norm. Good lesson learned - hope this will always be in my mental "checklist" now!

We originally thought we'd have to rent SCUBA gear - but he managed to free it just on snorkel.  But it was epic -  several hours of him diving down, one breath at a time.   He can stay down a long time - more than 30 seconds while kicking to keep himself 3' down while working.  Much tugging and pulling did little to dislodge it.  It was wrapped over/under itself many times - imagine how tight a 30HP motor can pull!


The eventual solution was to remove the zinc anode from the propshaft.  Then the rock hard-wrapped line easily came off. 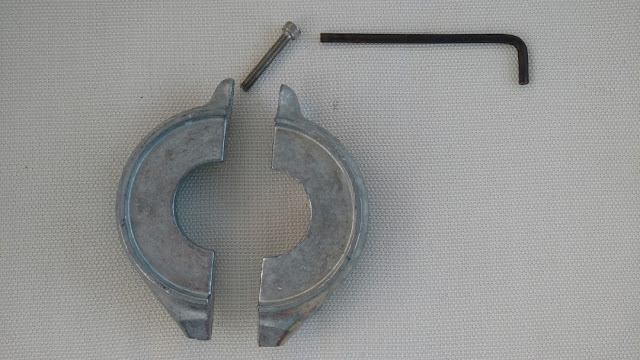 Other than that, Mrs. Lincoln, how was the play??