We rode to the airport in the morning with Dick and Lindy. They needed to go on home due to some previous commitments. But, we were free to stay....so we took that opportunity take some of our extra gear back to the airplane and to get a rental car. 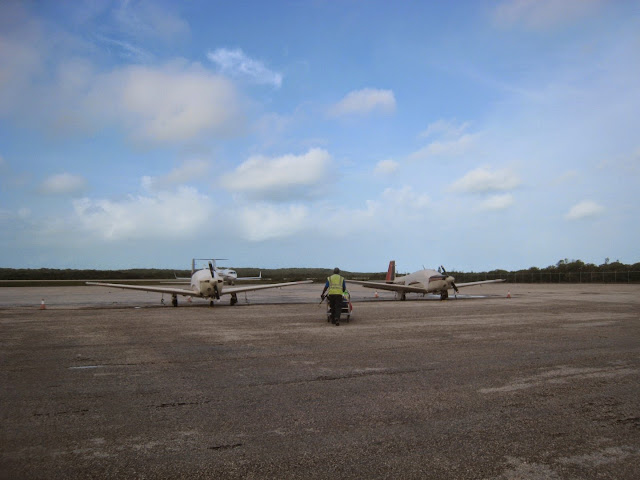 The other crew members were due to depart in the afternoon on the airlines - so we'd be the only ones staying another day.

After pleasant goodbyes, we headed off to explore the Great Exuma island on the one and only road..... 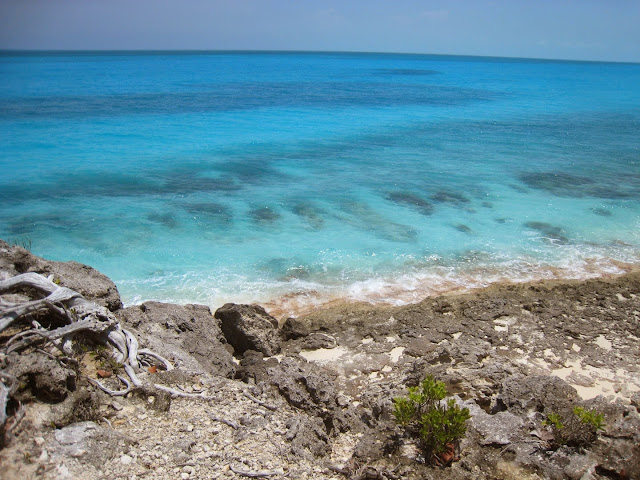 Interesting stopover to read historical markers - this is a salt pond left over from the 1700's.  You can still see the remnants of the rock walls in the shallow pond (they're the dark lines you see).  They controlled the amount of water coming into the pond area via sluice gates.  The slaves and other workers had the horrible job of raking the ever concentrating salt-water from one area to the next.  The marker explained that the slaves had terrible ulcers on their skin and often went blind from the glare. 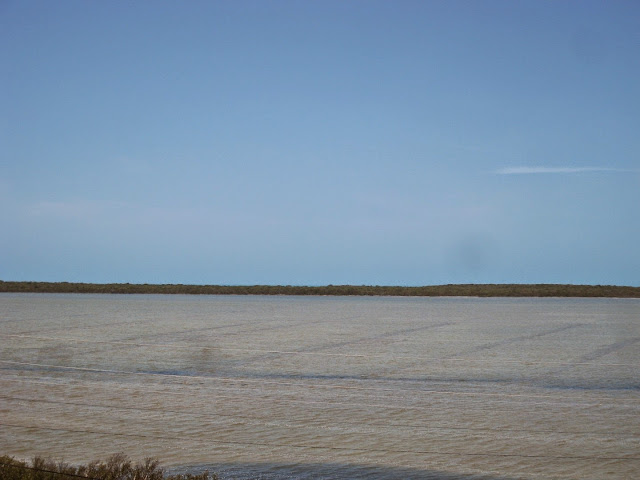 This tower is on the hill near the salt ponds - to serve as a beacon to ships coming from the Exuma Sound. 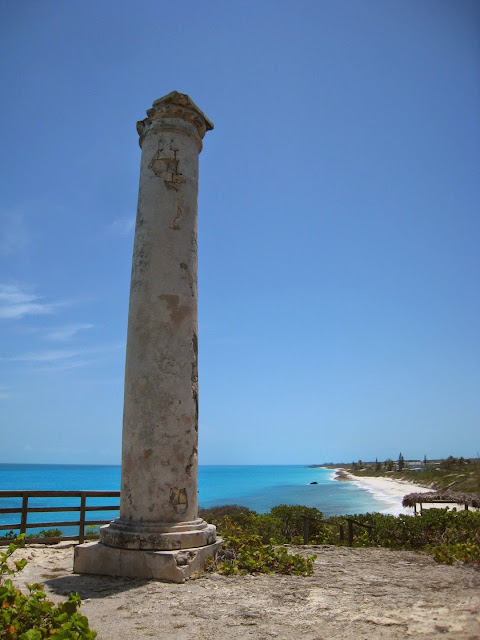 Beautiful views from the cliffs overlooking the Exuma Sound. 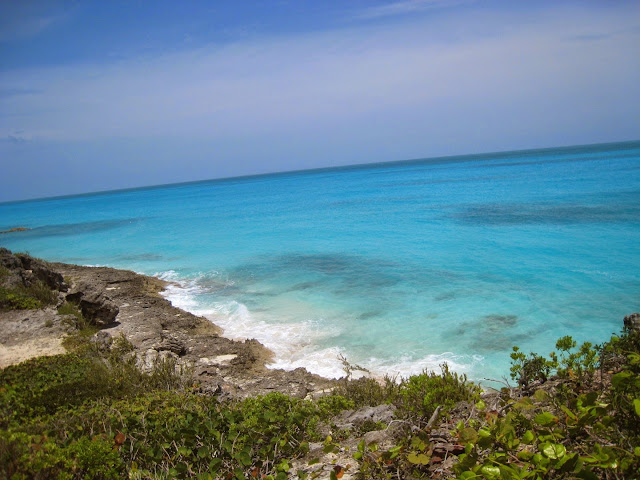 We drove the entire length of Great Exuma -here we went north to the small towns of Barraterre, Rolleville and Steventon. 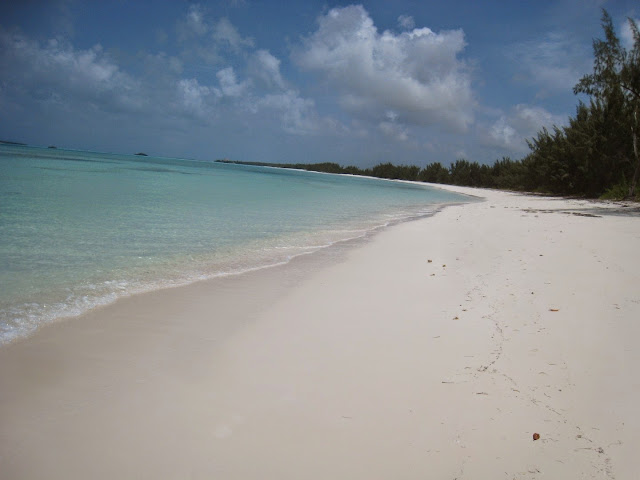 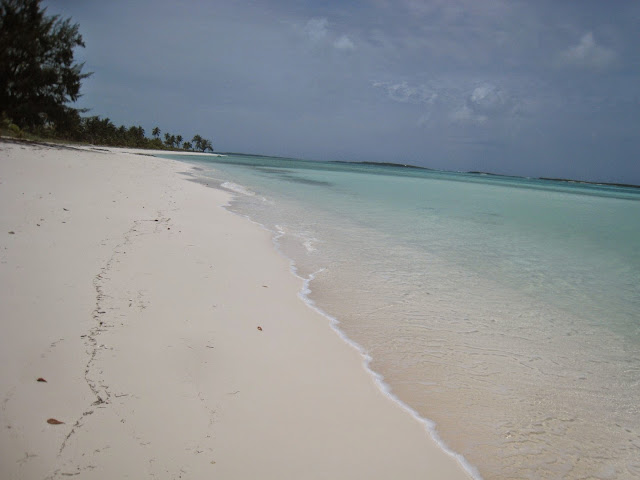 Located the Shoreline beach bar - I had wanted to go there on the boat but the wind/seas kept us away.  Unluckily it was closed today! 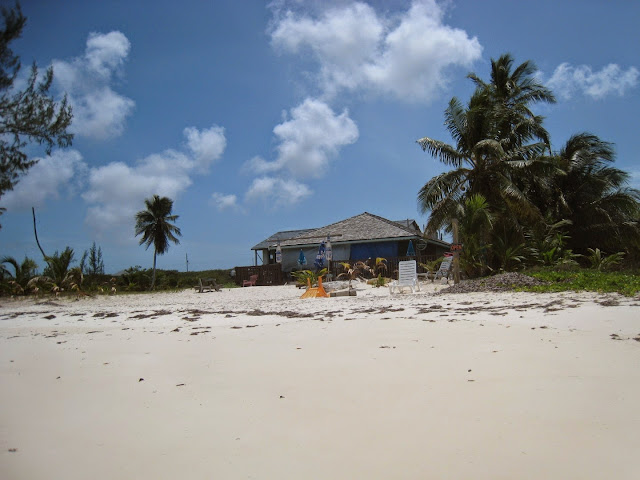 Did make it to Big D's beach bar - it was open - we stopped in and had a beer and some grouper fingers. 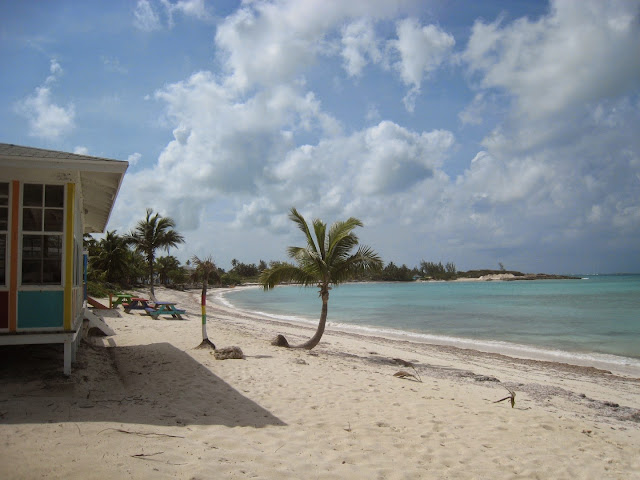 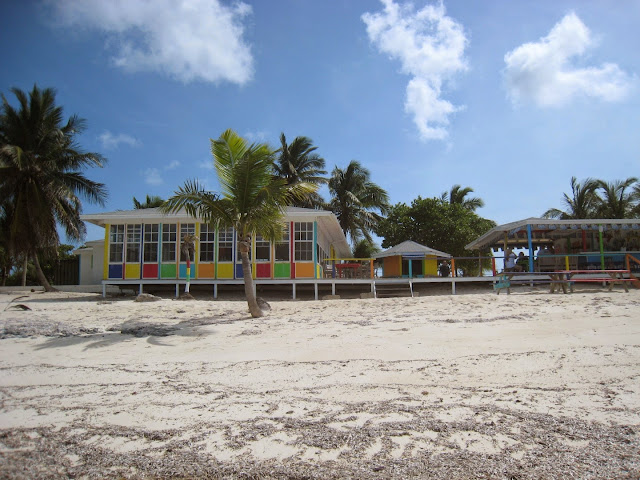 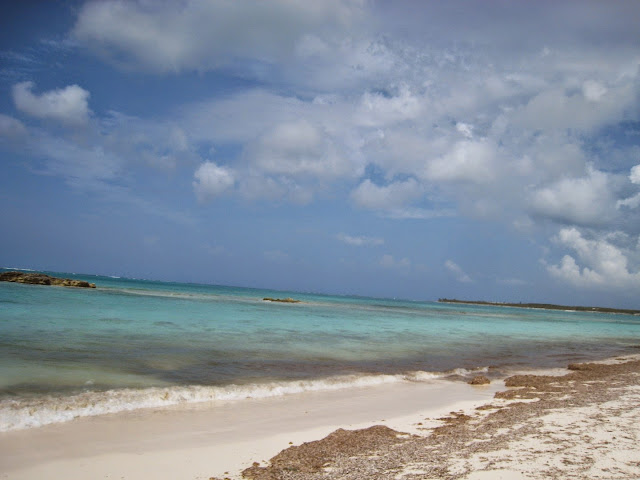 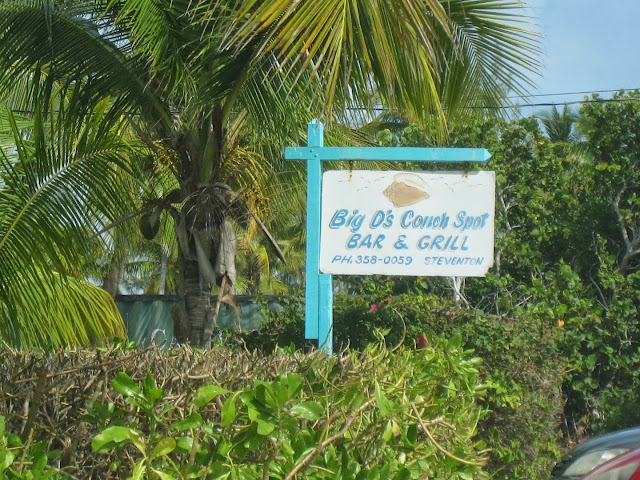 And that was about it for our island tour!!

Watching the weather, we decided we better head home..... 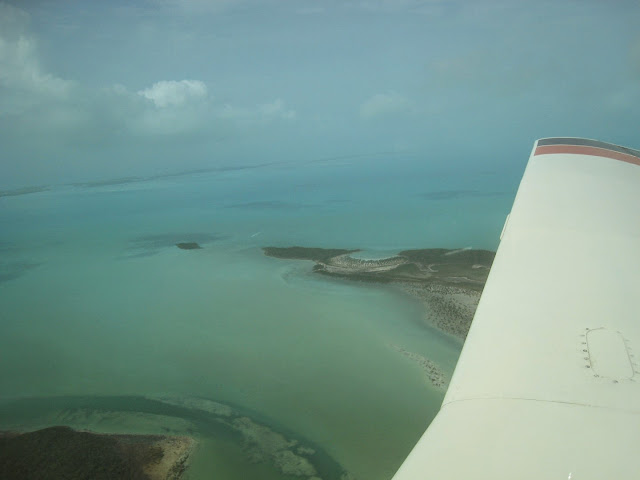 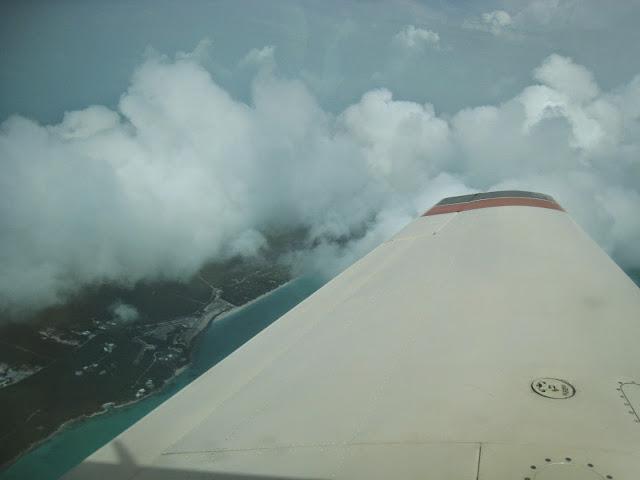 Last views of the islands and beautiful water! 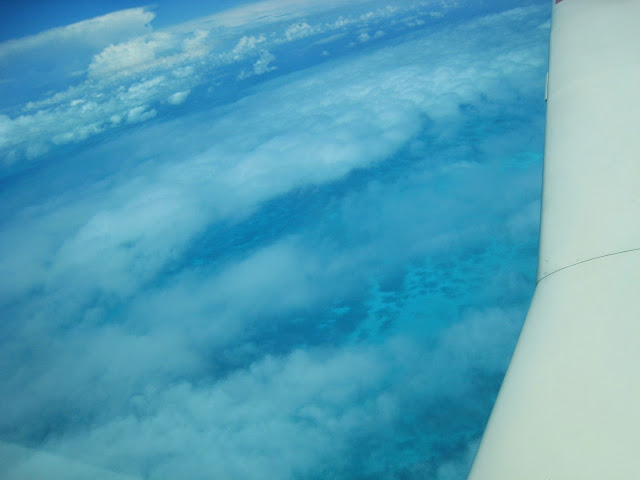 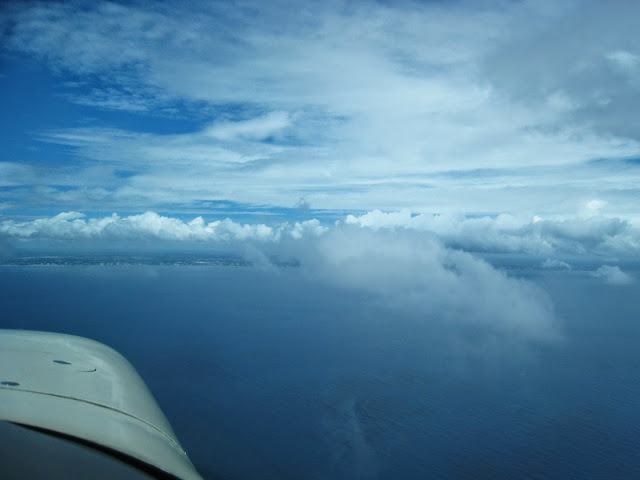 We decided we would have to clear in to US Customs at Ft. Lauderdale Executive airport instead of our usual Ft. Pierce.....the weather/storm was too bad to the north along the coastline.  When we came down thru the clouds, off to our right was our old stomping grounds.  Pompano Airport - where we trained for our private pilots certificates over 20 yrs ago - looks the same! 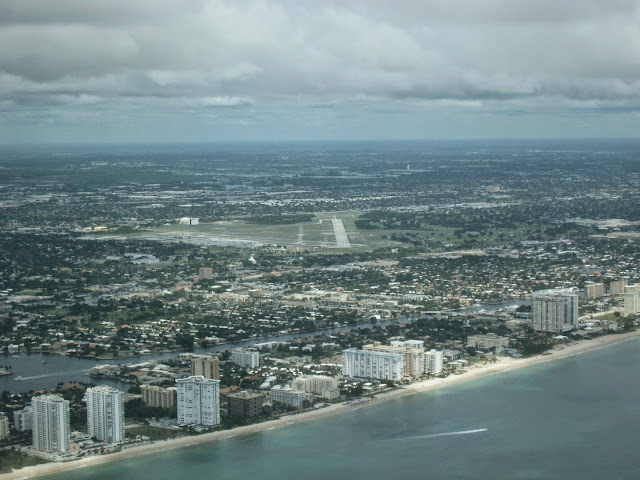 After a quick stop at Customs and refueling, we hopped back in the plane for the final, long leg to home.  This is the view most of the way.....nothing but white!  We dodged the storms by going thru central Florida instead of up the coastline like we usually do. 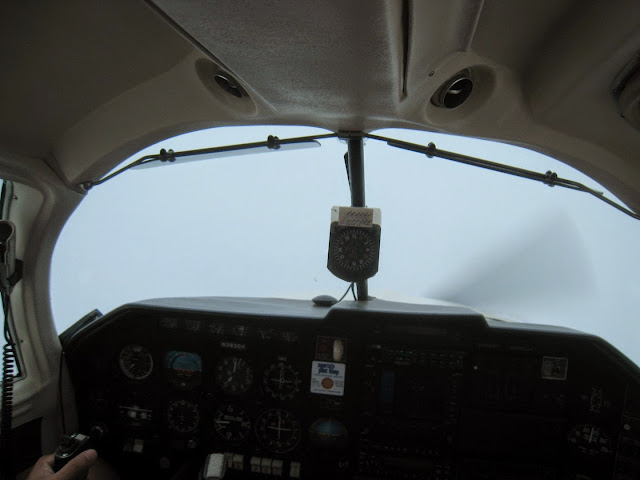 After 5 hours and 10 minutes sitting in the airplane in the same spot....we were finally home to green NC!  A great and memorable trip! 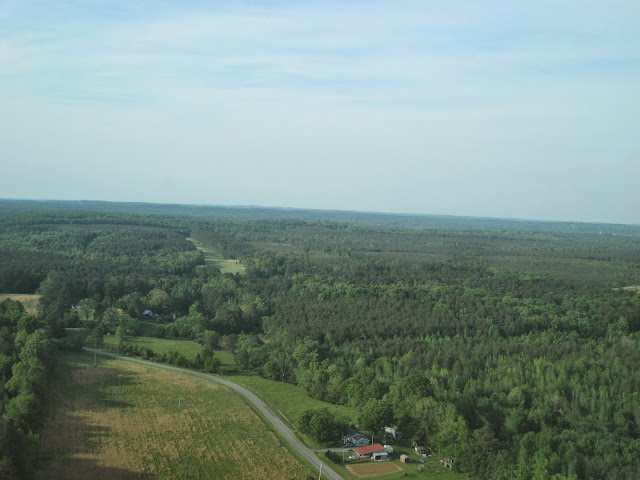