We dinghied back to Blackpoint Settlement in the morning - Reid had ordered some lovely coconut bread from the lady at the Straw Market. She said it would be ready at 9:30AM. The girls went to the little beach next to the public dock and collected a bag of "sea glass" for Sharon's collection. We bought a few provisions at the Straw Market and Adderly's store and headed back to the boat.


The papaya that we had gotten from a street vendor in Georgetown was ripe - beautiful fruit, but not as tasty as you might want.... 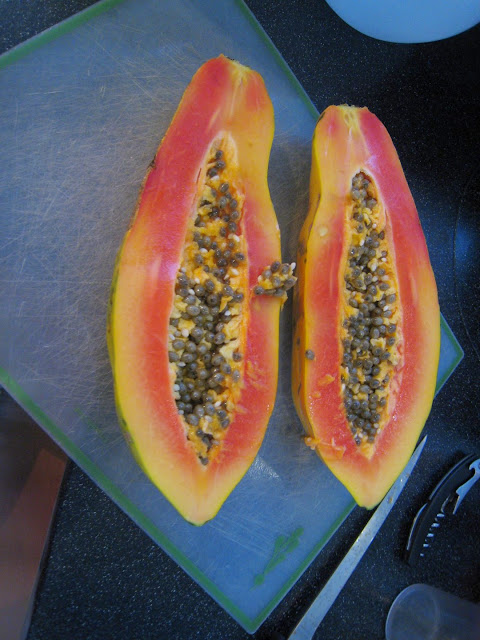 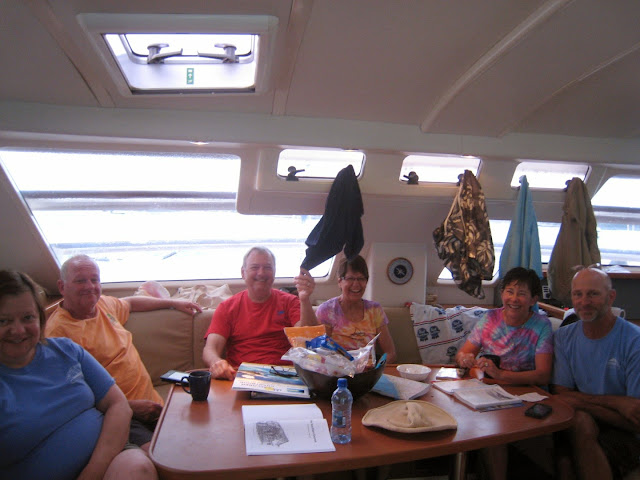 We hauled anchor and headed a little north to Big Major Cay - to see the swimming pigs! 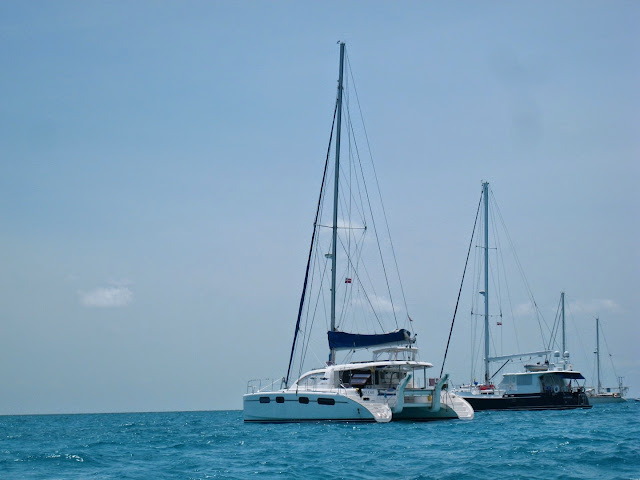 Dinghy to shore with a bag of vegetables - mostly leftover cabbage and lettuce trimmings. 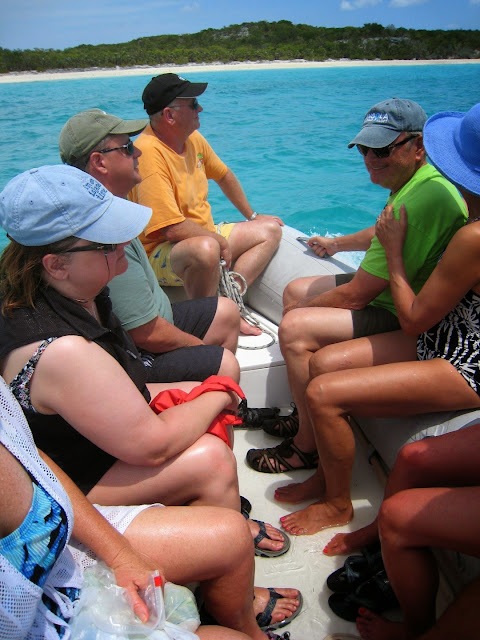 The pigs came out right away from the nearby scrub forest. 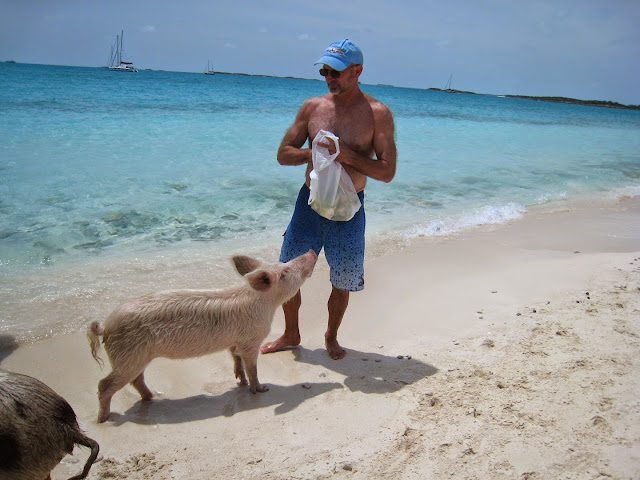 They particularly liked Reid....don't know what that says about him!!! 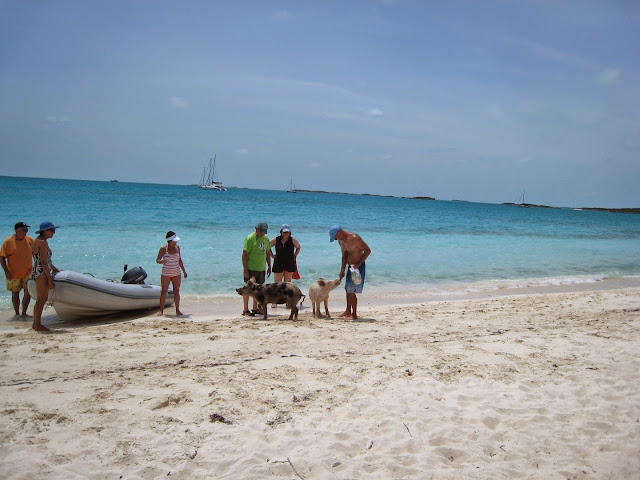 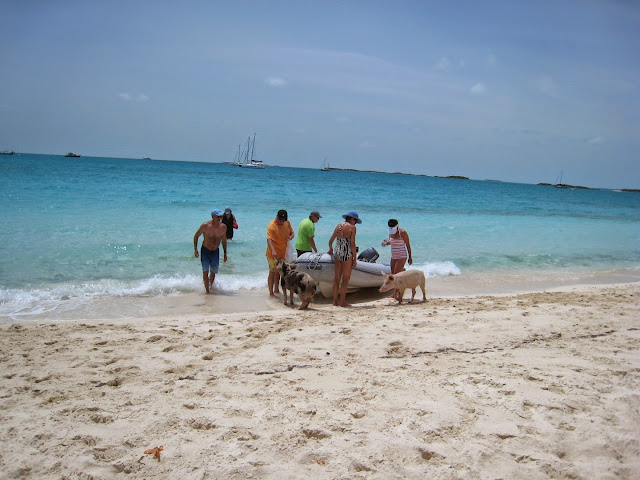 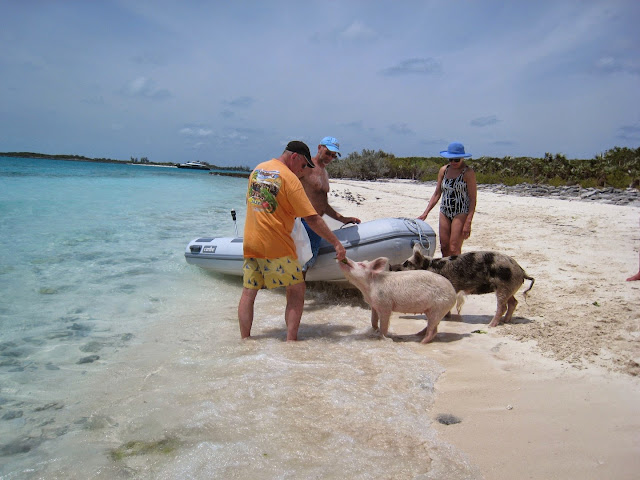 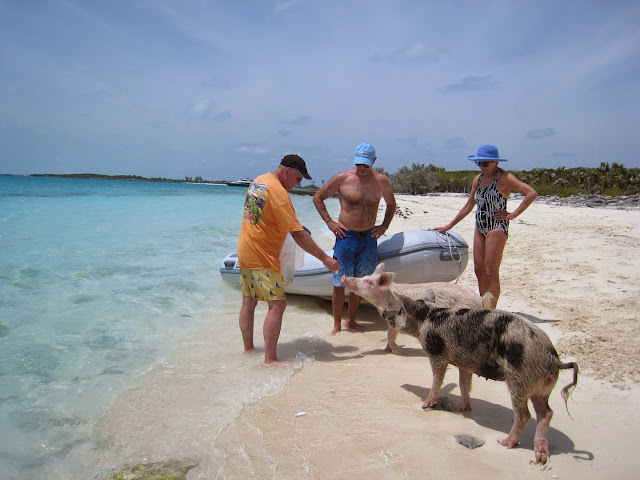 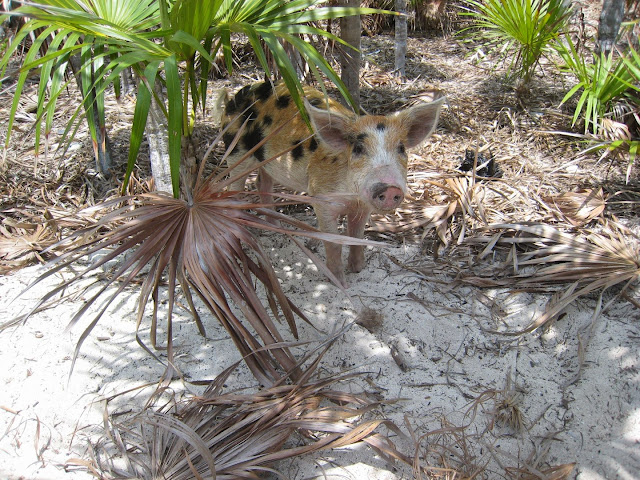 As you can see from the little snippet to the left of Duane....he's not too interested in tame pigs! 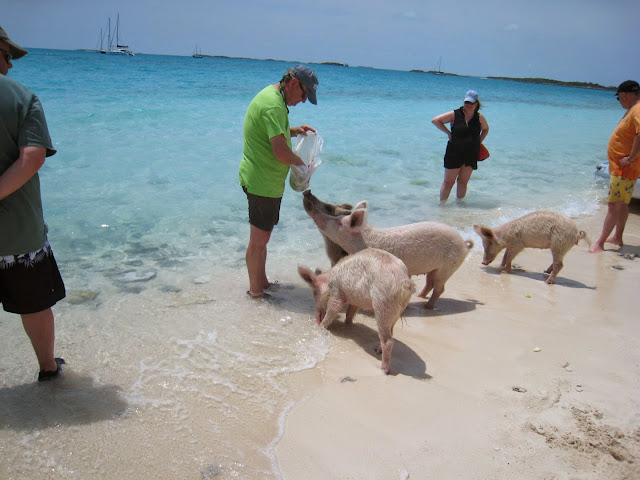 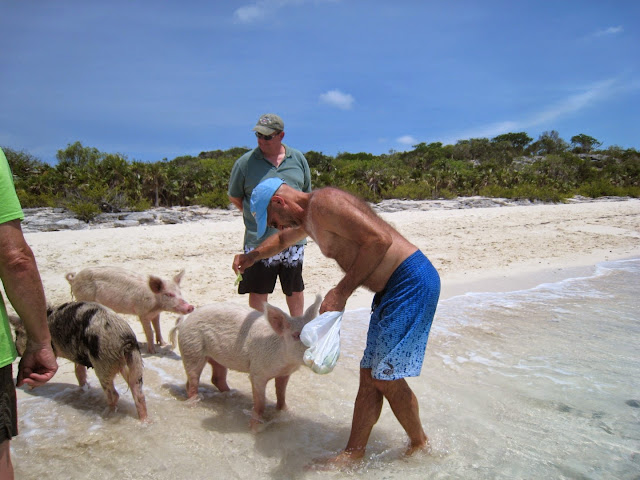 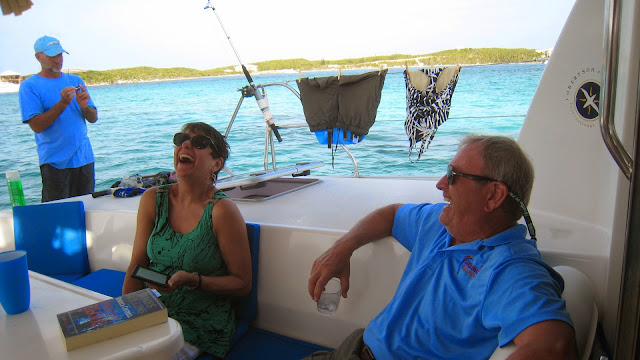 For lunch -  left over fish from Little Farmer's was made into tacos....very yummy.   Caramelized onions and more shredded coleslaw made a terrific lunch. 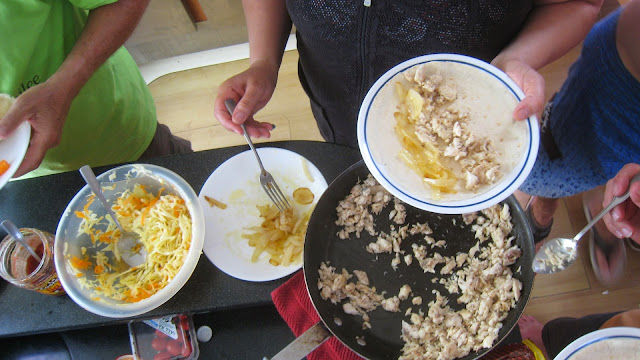 And some frozen drinks.....yes, we are eating and drinking well!! 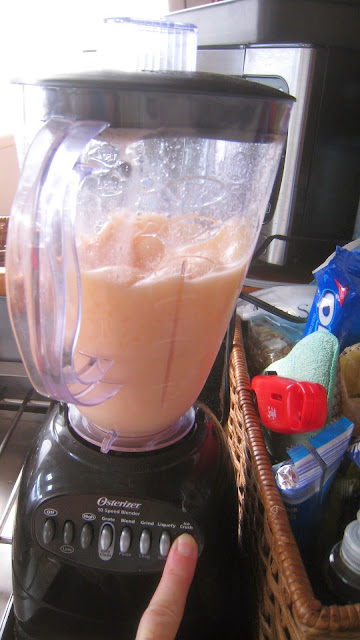 On to Staniel Cay - a short trip.

We tied up to a mooring ball near the Thunderball Grotto (famed from the 007 film).....we decided to save snorkeling there for tomorrow because we need a low tide to be able to fit into the underwater cavern.


We dinghied in to the Staniel Cay Yacht club - always some sharks milling around at the dinghy dock..... 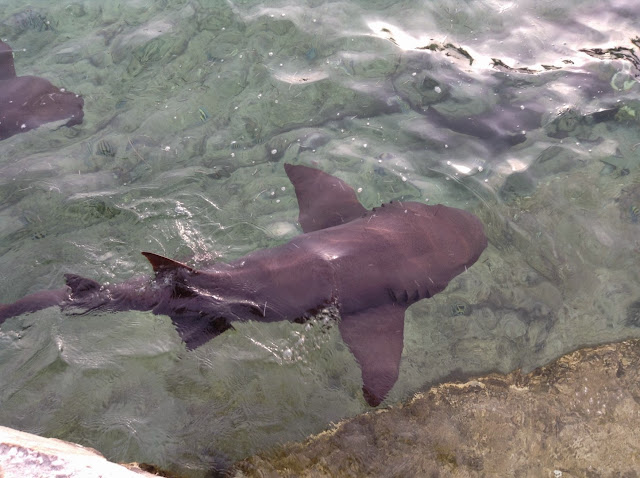 Waiting for a drink at Staniel Cay Yacht Club.....not the quickest, friendliest or cheapest!  Oh well..... 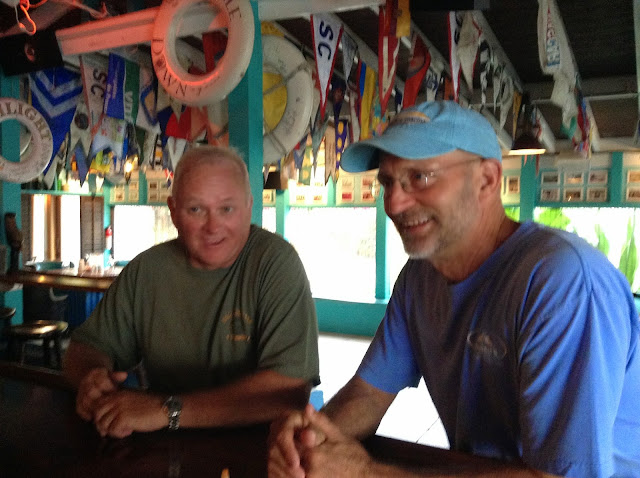 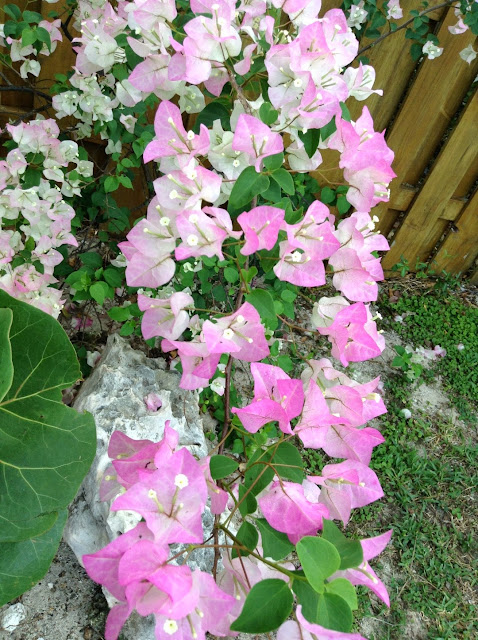 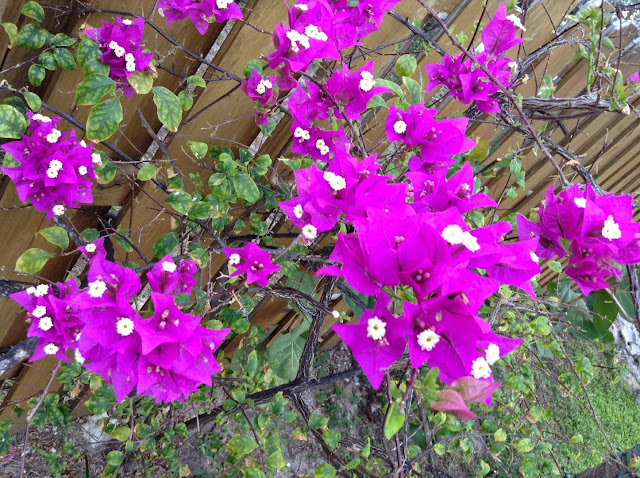 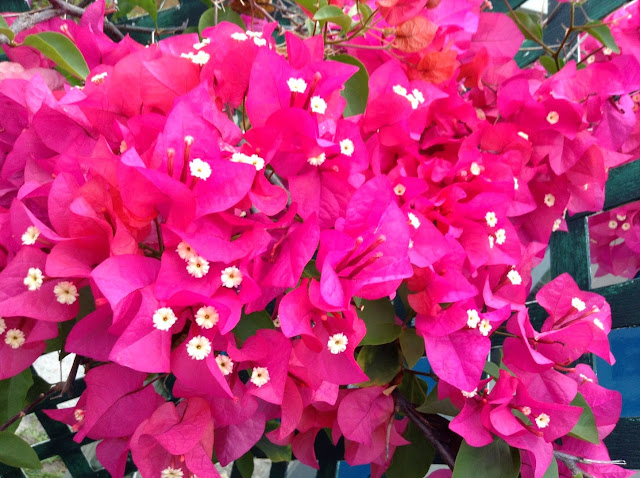 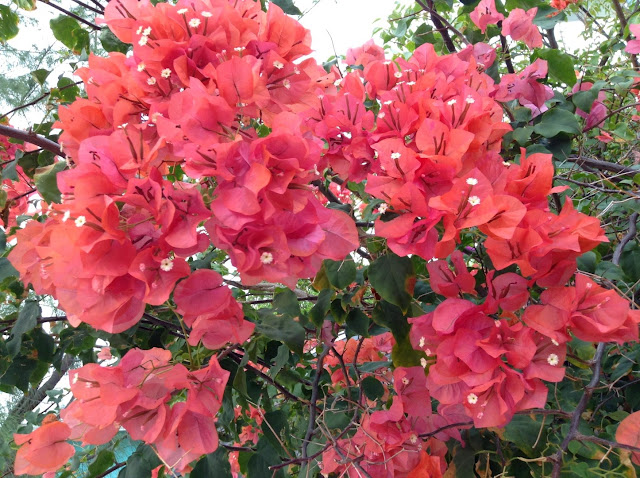 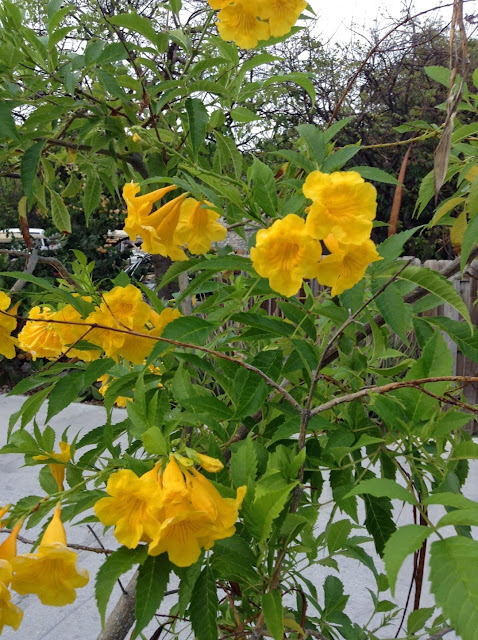 We wandered down the main road to Taste n Sea restaurant..... 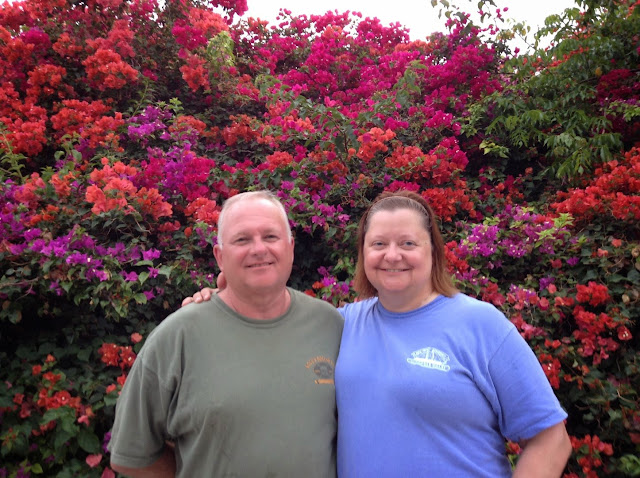 We all enjoyed a good and inexpensive meal - most had fresh grouper or conch.   Back to the boat for a joke telling session.

I'm going to write one of Reid's jokes - Just so I will always be able to search the blog for "Joke" and find it.    After the jokes, we all turned in for an early night again!

Two guys interviewed for the same job.  The interviewer told them it was too close to choose between them.  He gave them each a paper and pencil - told them that to test their ability to "think on their feet", they needed to quickly write down a poem about Timbuktu.   (Just the first thing that came to his mind).

The first guy finishes in just a few minutes -  he wrote:


The  interviewer told the 1st guy, "This is great, I've never had anyone come back with a good poem so fast.   I think you've got the job.  But, out of courtesy, I need to read the other applicant's poem".

Across the desert we did went.
We came across 3 whores and a tent.
Be they 3.
and We just 2.
I  bucked one,
And TIM BUCKED TWO.